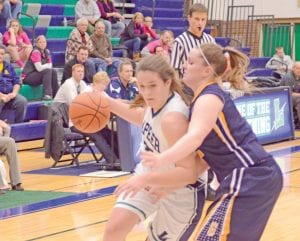 GENESEE COUNTY – Despite another slight decline in enrollment at Michigan High School Athletic Association member high schools for the 2015-16 school year, participation in sports rose for the first time since 2010-11 as a total of 284,227 participants took part in the 28 sports for which postseason tournaments are sponsored by the MHSAA.

This year’s 0.71 percent dip in enrollment at member schools is the latest in a steady decrease that has seen enrollment fall nearly 12 percent total since 2006-07; however, participation in MHSAA-sponsored sports was up 0.57 percent over 2014-15. A total of 15 sports saw participation increases from the school year before, with boys’ and girls’ bowling, boys’ cross country and girls’ lacrosse setting records.

Girls’ lacrosse continued its streak of setting a participation record every season since becoming a sponsored tournament sport in 2005, this time with a 7.2 increase in participation to 2,775 athletes. Boys’ bowling saw a 3.7 percent increase this season to a record total of 3,860 athletes, while girls’ bowling was up 2.6 percent for a record total of 3,047. Boys’ cross country set a record for the second time in three seasons, this time up 5.3 percent with 9,254 runners.

A number of sports experienced bounce-backs from decreases over recent years. Boys’ basketball (0.5 percent increase to 21,524 athletes) was up after two straight years of decreas- es, while girls’ softball (5.2 percent increase to 13,788 athletes) was up after four straight years of lowering numbers. Boys’ track & field had seen participation decrease six straight seasons before bouncing back 1.6 percent this spring with 22,803 athletes, and wrestling also came back from six straight seasons of decreases with a 1.3 percent increase to 9,601 athletes. Girls’ volleyball just edged girls’ lacrosse for the largest increase of any MHSAA-sponsored sport in 2015- 16, jumping 7.8 percent with 19,395 athletes after three straight seasons of declining participation.

However, a few troubling trends did continue. Girls’ basketball participation fell for the 10th straight season, this time nearly a percent to 15,558 athletes, the sport’s lowest total since records first were kept in 1991-92. The latest decrease brings the total fall in participation to 18.7 percent in that sport since a U.S. District Court decision led to the switching of girls’ basketball season from fall to winter beginning in 2007-08. Comparatively, girls’ enrollment at MHSAA schools during that time has fallen 12.1 percent. Although volleyball, the sport that swapped seasons with girls’ basketball and moved to fall, saw a large increase in 2015-16, its total number of athletes still was the third-lowest for the sport since 1993-94 and its participation is still down 10 percent since the seasons changed.

Also of note in this year’s survey:

• The increase in participation for 15 sports with a decrease in 13 was compared to an increase for only eight and decrease for 20 in 2014-15. Those increases and decreases were split evenly across boys’ and girls’ sports last school year; this school year, six boys’ sports were up and eight were down in participation, while nine girls’ sports were up and only five saw decreases.

• Skiing saw the largest combined decrease among pairs of related sports, with boys’ participation down 7.2 percent to 719 and girls’ down 2.8 percent to 652 after both experienced increases a year ago. Swimming & diving experienced decreases for both girls’ and boys’ together for the second straight year, although this time the decreases were smaller than in 2014-15; girls were down 4.3 percent to 5,378 athletes and boys were down 4.2 percent to 4,732.

The participation figures are gathered annually from MHSAA member schools to submit to the National Federation of State High School Associations for compiling of its national participation survey. Results of Michigan surveys from the 2000-01 school year to present may be viewed on the MHSAA Website – www.mhsaa.com – by clicking on Schools > Administrators > Sports Participation Listing.