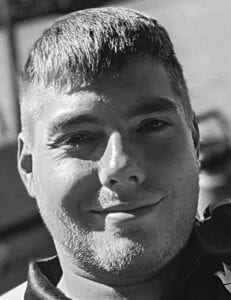 MICHAEL SUTHERLAND, 29, of Columbiaville, passed away on Wednesday, July 1, 2020.

Michael Benjamin Wayne Sutherland was born in Norfolk, VA, on March 24, 1991, son of Leo and Debra (Howard) Sutherland. He attended and graduated from Kearsley Schools in 2009. After graduation, he attended Baker College focusing his studies in the electrical program. Michael worked for Coca-Cola Bottling Company. He very much enjoyed spending time outdoors. He especially liked bonfires, golfing, canoeing, cookouts, as well as fishing and hunting with his father and grandfather. Michael enjoyed helping Papa. He loved vacationing and spending time with his family and friends. One of his favorite trips was to Hawaii with his mother, step-father, Mike and his brother, Logan. He was so proud that he shared a birthday with his baby sister, “Sis”. Michael had a big heart and he will be deeply missed by his family and all that knew him.

In lieu of flowers, memorial contributions may be considered in Michael’s memory to Logan’s Heroes www.logans-heroes.org/, an organization honoring of his brother, Logan.