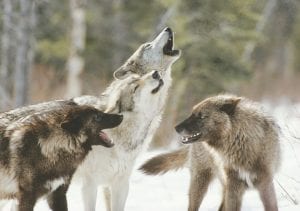 WASHINGTON — The Michigan Department of Natural Resources filed an appeal of a December 2014 federal district court ruling that returned wolves in Michigan and Wisconsin to the federal endangered species list and wolves in Minnesota to federal threatened species status.

The appeal – filed by the Michigan Attorney General in the U.S. Court of Appeals for the District of Columbia – asks the court to uphold the U.S. Fish and Wildlife Service’s December 2011 decision that removed the Great Lakes Distinct Population Segment (DPS) of wolves from the federal endangered species list.

“Returning wolf management to wildlife professionals in the state of Michigan is critical to retaining a recovered, healthy, and socially-accepted wolf population in our state,” said DNR Director Keith Creagh. “Michigan residents who live with wolves deserve to have a full range of tools available to sustainably manage that population.”

Wolves in Michigan are 15 years past the population recovery goals set by the federal government. The DNR will argue against the federal district court’s ruling that wolves must recover across their historic range – which includes the lower 48 states and Mexico – before Michigan’s wolf population can be removed from the federal endangered species list.

In addition, the state will argue against the district court’s conclusion that the USFWS failed to demonstrate that Michigan’s laws and regulations adequately protect the wolf population within Michigan.

“Wolves in Michigan and the other western Great Lakes states are fully recovered from endangered species status, which is a great success story,” said DNR Wildlife Division Chief Russ Mason. “Continuing to use the Endangered Species Act to protect a recovered species not only undermines the integrity of the Act, it leaves farmers and others with no immediate recourse when their animals are being attacked and killed by wolves.”

Michigan’s wolf population numbers approximately 636 in the state’s Upper Peninsula. With the return to federal protection in December 2014, the DNR lost the authority to use a variety of wolf management methods, including lethal control, to minimize wolf conflict with humans, livestock and dogs. The change in status also suspended state authority that allowed livestock and dog owners to protect their animals from wolf depredation when wolves are in the act of attacking those animals.

The federal district court’s December 2014 decision came in response to a lawsuit filed by the Humane Society of the United States, in which the State of Michigan participated as a defendant intervener arguing against returning the Great Lakes DPS of wolves to the endangered species list.

Michigan joins the USFWS and a number of hunting and conservation organizations in appealing the ruling.