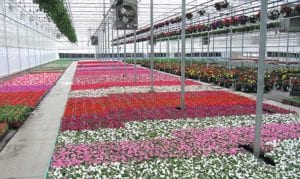 Michigan is behind only Florida and California in greenhouse floriculture production. Photo provided

If you bought potted flowers, annuals or perennials from a local garden center, you’re most likely buying a Michigan-grown product.

According to Michigan State University (MSU), Michigan is third in the nation for greenhouse floriculture production, the cultivation of flowers. Michigan does this on a very large scale — 46.3 million square feet of greenhouse cover, according to the Michigan Greenhouse Growers Council (MGGC).

Michigan makes sense logistically, as these greenhouses serve the Midwest and Eastern U.S. These are live, flowering plants that end up in garden centers, versus cut flowers you’ll see in flower shops. Think Easter lilies, six packs of annuals or hanging baskets. These facilities are throughout the state, but largely concentrated in the Kalamazoo and Grand Rapids area, Lopez said.

Production facilities make up 50 percent of the MGGC or approximately 62 businesses. Administrative Assistant Cindy Ray said there’s about 10 percent more that aren’t members. In 2018, there were approximately 9,000 jobs in the Michigan floriculture industry, she said.

Ray said summer annuals and perennials were planted in January. They’re growing in Michigan greenhouses to be ready to hit local stores on May 1. Easter flowers like lilies were planted even earlier.

Holiday mainstays like poinsettias will be planted in early August.

She said Michigan is first in Easter lilies, geraniums, hostas, impatiens and begonia basket production, and second in marigolds.

While much smaller in scale, the impact of Michigan greenhouse-grown produce can be tasted locally.

Revolution Farms of Caledonia is 90 miles away producing greens for Family Fare and VG’s stores throughout Michigan.

“I think a lot of people don’t realize you can buy locally greenhouse-grown produce in the winter,” Lopez said, adding that it’s often higher quality because it doesn’t have far to travel.

Some Sunset brand produce is Michigan grown via Mastronardi Produce in Coldwater or at Post Gardens in Rockwell. Local stores also can stock Michigan strawberries.