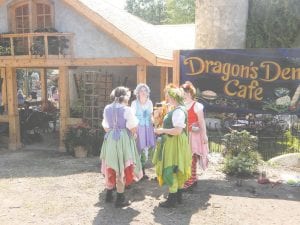 HOLLY – The Michigan Renaissance Festival is back and celebrating 39 years of family fun. From small beginnings at Columbierre, to one of Michigan’s finest regional attractions.

The Michigan Renaissance Festival was first held in 1979 in Clarkston. This inaugural Festival featured renaissance dancing, archery contests, jugglers, mimes and madrigals. The Renaissance Festival attracted 11,000 patrons during its 5-weekend event. As attendance to the popular event grew, so did the number of artisans, demonstrations, entertainers and foods.

The show has continued to develop fans throughout the years, offering more each year in entertainment, education, food and art. Now seeing the more than 250,000 fans a year, the Festival has provided opportunities for fans to escape from this realm and journey into a time when Kings and Queens rule and Mermaids and Fairies are more than just a dream.

There are plenty of new additions to the roster in 2017, including Merlin’s Magic Quest, a Throne of Swords modeled after the iconic seat in Game of Thrones, a Bloody Mary Bar and the Valley of Aberdare Obstacle Course. 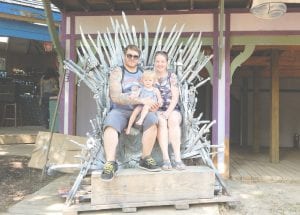 [L-R] Bobby Cantrell, Layla Cantrell and Krystal Walker of Monroe sit in the new iron throne, modeled after the one popularized by HBO’s Game of Thrones.

Elyssa Croak, a marketing coordinator for the Michigan Renaissance Festival, said persons of all ages can join in Merlin’s Magic Quest, which typically involves 30-80 participants per day. The quest, which functions as a scavenger hunt around the festival, bids players to “follow clues, solve puzzles and engage in a battle of wits.”