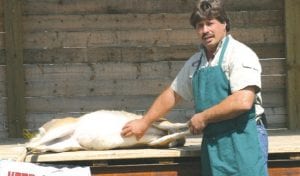 Steve Francis of Country Smokehouse in Almont demonstrates how to field dress a deer.

STATEWIDE — For the past twenty years, the Michigan Sportsmen Against Hunger has teamed up with game processors, as well as donors to help assist charities feed those in dire need. The volunteer organization is run by sportsmen and women trying to contribute to the well being of their community. The group has put together a large network of charities and meat processors to help bring food to those who need it more than others, especially during the deer and wild game bird hunting seasons.

No other state in America has higher hunting license sales than right here in the state of Michigan. Michigan has also witnessed a massive increase in the number of working poor familes, which is a trend that saw it’s greatest increase between 1975-99. With the cooperation of many generous people, including processors, hunters, and farmers, as well as volunteers, the organization has accumulated more than 50,000 pounds of wild game and food for those in need.

With great help from their processors, MSAH helped to scrounge up more than 32,800 pounds of venison to help needy families across Michigan between 2008-09. The organization goes by a certain mission statement; “recycling precious natural resources into opportunities for a better community.”

Recently, the Michigan DNR began accepting donations from the MSAH, which can be made on the DNR website, www.michigan.gov/dnr. Contributions are also made through simply purchasing a hunting license. Donations from the public for funds are tax deductable, and can be made at the website of the Michigan DNR, under the section “help feed the hungry.”

Each year, the MSAH hosts a challenge between the Madison Square Gun Club, Sparta Hunting and Fishing Club, and the Rockford Sportsman’s Club in an effort to accumulate the highest amount of non-perishable food items, including wild game, for the benefit of the hungry and needy in our state. The Rockford Sportsmen’s Club has contributed as the biggest donor, winning the challenge uncontested each year since it’s inauguration. In 2009, all three of the groups totaled a collection of 30,126 pounds of canned goods and donated game, which resulted in 120,504 meals to those less fortunate.