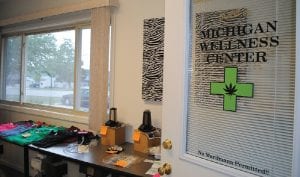 Michigan Wellness Center, 3095 S. Dye Rd., Suite A, offers a safe and secure environment where individuals can obtain information and receive help on registering for a medical marijuana card.

FLINT TWP.
— When Michigan voters passed the Michigan Medical Marihuana Act in 2008, the law made it legal for people with certain illnesses to use medical marijuana. To help residents obtain information and register for a medical marijuana card, owner Nick Panessidi opened the Michigan Wellness Center, 3095 S. Dye Rd., Suite A, on June 7.

Panessidi, a resident of the Lansing area, decided to open the center after learning that many of his friends in need of the medical marijuana card did not know where to go to obtain one. The lack of knowledge prompted him to open a center that would “do everything above-the-board.”

When someone comes to Michigan Wellness Center, the first step is to fill out pre-qualification packet. From there, the center helps the individual obtain their medical records from his/her doctor. “The turnaround time for medical records can be as little as one hour to a few weeks,” Panessidi said. Once the medical records are received, a nurse checks the records and then presents them to a doctor to see if the individual qualifies for the card. Once the doctor determines that the individual qualifies, he/she comes in, gets the doctor’s signature for the application and then the center prepares and submits all of the paperwork, including the Physician Certification, to the State of Michigan for the card.

Michigan Wellness Center has three doctors, but the names of those doctors are not made available to the general public. Panessidi said the doctors, who are not local but have licenses to practice in Michigan, are not named publicly “because they (the center) does not want the doctors to be ostracized,” he said.

“But, the applicants get the doctors’ names,” Panessidi said. “We get the applicants all the information. We want everybody to feel safe and comfortable here.”

Panessidi said the center has seen an average of 120 patients per month since opening, and the average age is around 40. The youngest patient has been a minor, accompanied by the mother, and the oldest has been in their late 70s and was seeking to obtain a card for treatment of glaucoma. Panessidi said many people come from the local area, but have come from Mio, Midland, Southfield and Jackson.

According to the Michigan Medical Marijuana Act, several medical conditions that have been diagnosed by a physician qualify a person. There are specific medical conditions listed in the Statute as debilitating medical conditions, such as cancer, glaucoma, positive status for Human Immunodeficiency Virus (HIV), Hepatitis C, Amyotrophic lateral sclerosis (ALS – Lou Gehrig’s Disease), Crohn’s Disease, agitation of Alzheimer’s Disease and nail patella. There also are some general diseases, medical conditions and treatment not listed, but authorized in the Statute, such as cachexia or wasting syndrome, severe and chronic pain, nausea, seizures (including but not limited to those characteristic of epilepsy) and severe and persistent muscle spasms (including but not limited to those characteristics of multiple sclerosis).

“We do not want any of our patients to smoke marjiuana,” he said. “We want to specialize in helping people learn alternative ways.” Michigan Wellness Center recommends patients vaporize or ingest marijuana, depending on the benefits they are wanting to achieve.

“Eighty-five percent of cannabinoids can be released from the organic matter through vaporization, and only 40-42 percent are released from smoking,” he said. “Smoking alters it. Vaporization is two times more effective.”

Vaporization also extracts essential oils from marijuana, and those oils can be incorporated into edible products or suppositories for people who cannot swallow.

Since opening the Michigan Wellness Center, Panessidi has experienced some hiccups, including a recent moratorium on his business by Flint Township. The moratorium was originally six months, but Panessidi said the township added three additional months because of a lack of knowledge in how to deal with his business.

“Moratoriums are popping up all the time,” he said. “But, a moratorium gives people a chance to educate themselves.” Despite the moratorium, Panessidi said he’s had good response from the community; some members of the Flint Township Board of Trustees have visited his facility to talk with him, and he has made it clear that he plans to stay and help the community.

“I’m not going anywhere,” he said.

Michigan Wellness Center is open 10 a.m.- 6 p.m. Monday-Friday and 10 a.m.-2 p.m. Saturday. For more information on the center, including help on qualifying for the medical marijuana card and qualifying conditions, call 810-820-8555 or visit www.michiganwellnesscenter.