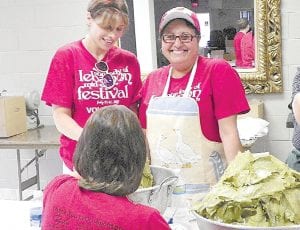 Stuffed grapeleaves were one of many dishes being prepared by the women volunteers of the church. Twin belly dancers (below) entertained the crowd at the Our Lady of Lebanon Mid-East Festival.

FLINT TWP. — Would you like fries to go with that?

“Yes” could be the answer for the first time because of efforts made to offer a more diverse menu at the annual Our Lady of Lebanon Mid- East Festival last weekend on the grounds of the Maronite Catholic church on Calkins Road.

The bulk of the menu still had traditional favorites such as shawarma sandwiches, kibbee balls, tabouli and stuffed grape leaves. French fries which go well with the sandwiches and Iraqi kebabs were added this year as a nod to the diversity of the church membership and the festival attendees, said Jason Klanseck, festival organizer, who noted that parishioners includes African-Americans, Filipinos, Chaldeans and other ethnic groups.

Food and entertainment are main attractions at the cultural celebration, he said. Plenty of both were served up during the three-day event including a fireworks show, belly dancing demonstrations and lessons, dancing, singing and more. 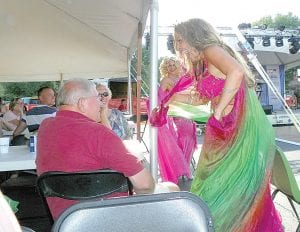 “We focus on the best aspects of the culture and the hospitality of Middle Eastern people,” Klanseck said.

“You can see by looking around you that 75 percent of our guests are not Middle Eastern which is a great thing to see.”

Klanseck said organizers were projecting this year’s attendance at 10,000 people for the three-day event which was expanded from a day and a half last year when about 6,000 people attended.

It was the fourth consecutive year for the event which resumed after a 12 year hiatus from 1996 to 2008. Before that, it ran 21 consecutive years, said Klanseck, one of the younger members of the church who decided to step up to the plate and resume the traditional celebration.

Part of festival proceeds will be used for church operations such as repaving the parking lot and roof repairs, he said. Some of the funds raised also are donated to support a children’s unit at Hurley Medical Center and to help the homeless, he said. 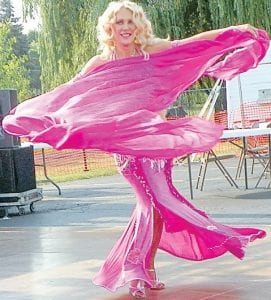 One of the belly dancers who performed during the Mid-East Festival last weekend.