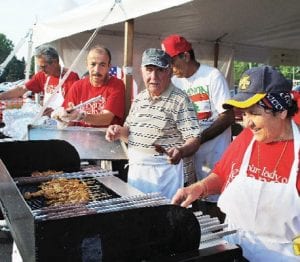 FLINT TWP.
— With the smell of chicken shish tawook filling the air, the Our Lady of Lebanon Mid-East Festival provided attendees with two days full of good food, music and fun.

Those who attended the festival hungry were invited to sample a wide range of Lebanese cuisine, such as kibbee balls, hummus dip, stuffed grape leaves, labneh sandwiches, baklawa and baked macaroons.

In addition to the food and music, the festival also gave the church a chance to educate the public on its culture and religion. Both days featured church tours and cooking demonstrations, and an information area was present with displays and a pictorial listing of famous Lebanese individuals.