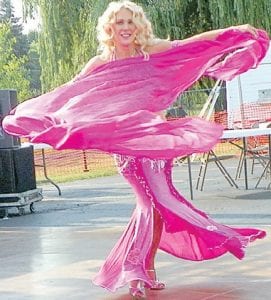 FLINT TWP. — More than 10,000 people are expected to attend the annual Mid- East Festival hosted by Our Lady of Lebanon Maronite Church which starts Friday and continues through Sunday.

For the fifth consecutive year, the colorful sights and sounds of Middle Eastern culture will be shared with the public during the three-day celebration held on the grounds of the church at 4133 Calkins Road.

“The sum of what we are doing is we are trying to create an event to share the hospitality and culture of the church with the community to build memories together,’’ said Jason Klanseck, festival chairperson.

Food, entertainment, a fireworks display, bounce houses and a chance to win valuable prizes are among the fun for all ages being offered.

Admission to the festival is free but parking is $3. The event is a church fundraiser and will sell food, drinks and raffle tickets at affordable prices. 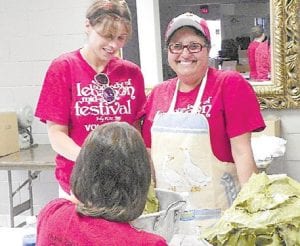 Stuffed grapeleaves were one of the many dishes prepared last year by church volunteers.

Proceeds from the events helped the church get funds to repave its parking lot, which will be done this year right after the festival ends, Klanseck said. The festival also raises funds to support community programs such as feeding the hungry and also to help people, especially children, with medical expenses. The church supports the burn and cancer units at Hurley Medical Center, Klanseck said.

Klanseck said that festival attendance has increased about 40-50 percent each year since it was resumed five years ago after a 13-year hiatus. The festival first started in 1976 and ran for about 19 years before the break. It draws attendance from the Flint, Detroit and Lansing areas.

Festival entertainment kicks off Friday at noon with traditional Lebanese music followed by an opening ceremony at 5:30 p.m. that includes singing of the national anthems of the United States and Lebanon.

Other opening night events include a live band and singer, bellydancers and Dabke dance performances. The energetic Dabke group dance is a popular tradition at celebrations.

The fireworks show on Saturday night is set to start about 9:40 p.m. followed at 10 p.m. by popular singer Zak Baalbaki and then a midnight Mass.

The raffle will award a first prize of $2,500 to be drawn on Sunday at 5 p.m. Items being raffled include a Ipad3 as a second prize; a 50-inch flatscreen TV as a third prize; an Ipod Touch media player as the fourth and fifth prizes and an Amazon Kindle Fire e-reader as the sixth through tenth prizes. Raffle tickets cost $1 each or $20 for 25 tickets.

The menu of homemade Mid-Eastern foods to be sold in the food tent includes a full array of specialties including Kibbee Balls, Stuffed Grape Leaves, Hummus Dip, Tabouli, Shawarma and Falafel sandwiches and more. A variety of desserts include Baklawa, honey balls and baked macaroons.

A beer tent is provided for patrons ages 21 and up and children’s activities include a walk-on-water ball, a bungee trampoline and bounce house. A vendor’s area will also be open.

For more details about the daily schedule of events, contact the church office at 810- 733-1259 or visit www.mideastfestival.com.