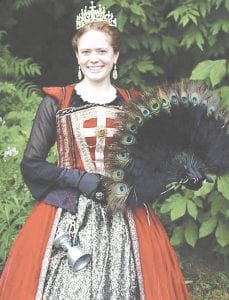 Queen Anna of the Mid-Michigan Renaissance Festival is excited to welcome visitors to the 10th anniversary of the festival, which is set to kick off June 9 and will be held weekends through July 1.

VASSAR — After a long cold winter, the Enchanted Forest is coming back to life at the Mid-Michigan Renaissance Festival. The event, which is celebrating its 10th anniversary this year, is set to kick off again on June 9 and will be open weekends through July 1 from 11 a.m. to 6 p.m., rain or shine, at its location on Frankenmuth Rd. in Vassar. In honor of its 10th anniversary, the event has a great deal in store, including a new stage, new structures, new performers, vendors and much more.

Owner Toni Knoll, who helped to kick off the first Mid-Michigan Renaissance Festival in 2008, says that the gathering has grown each year since and is looking forward to another great summer. The reason for the development of this this festival was to provide a more flexible experience for merchants, staff, entertainers, playtrons and patrons. Mid-Michigan Renaissance Festival strives to provide an enjoyable experience for everybody.

“The people involved with our renaissance festival, rennies, as we say, are a very family oriented group,” said Knoll. “They all stick together and help each other however they can. They come out to the location and camp and work on everything, building stages and booths and things. They all work very hard to put on a great festival every year.”

The location of the Mid-Michigan Renaissance Festival, which is found at 7464 Frankenmuth Rd. in Vassar, covers almost four wooded acres and transports visitors to a fantastic time of lore and legend. The Enchanted Forest is home to a number of historical and fantasy characters, a variety of entertaining stage shows, many different shops, a food court full of delicious food, a real working tavern and the Children’s Knoll, which is full of games, activities and crafts for the whole family.

Along with the Enchanted Forest, a parking lot of approximately 12 acres ensures that there is plenty of room for hundreds of visitors every day. And all of those attendees are sure to stay entertained, as Knoll explained that this year’s festival is sure to be the best yet.

“We’ll have entertainment including gypsy dancers, a pirate and wench band, a folk and country band, food, approximately 40 vendors, theatrical combat, a magician and juggler, an aerialist and so much more,” said Knoll. “I’m really looking forward to this year’s festival, and I know everybody that’s involved is very excited, too. We look forward to it all year.”

For more information about the event, including theme weekends for this year’s festival, visit their website at www.midmichiganrenfest.com.