Amelia Gasser on the tuba; and Lauren Harvey on violin performing a duet with Bianca-Sam Bowers on the viola.

FLINT TWP. — Carman- Ainsworth School Board members got a chance to not only see but hear several middle school students who received high ratings at a Michigan School Band and Orchestra Association (MSBOA) event.

As part of a recognition held at the beginning of the school board meeting, the board and audience were treated to musical selections played by Amelia Gasser on the tuba, Lauren Harvey on the violin and Bianca-Sam Bowers on the viola. Lauren and Bianca-Sam played a duet.

The students were part of a group of seventh and eighth grade students from CAMS who participated in the MSBOA District 3 Middle School Solo and Ensemble on Dec. 3 at North Branch High School.

For this event students prepared literature to perform in front of a judge (family and friends) and were adjudicated on their performance, said Milissa Kenworthy, CAMS music instructor.

A final rating is given ranging from 1-5. All events from CAMS earned a Division One or Two rating, thus taking home a medal, Kenworthy said. 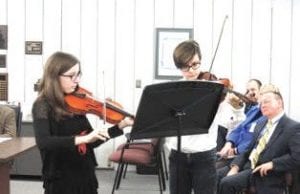