Middle School robotics teams off to a winning start 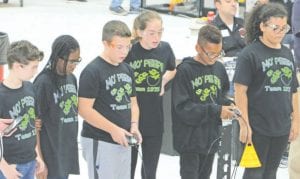 MOPeeps, the robotics teams at Carman- Ainsworth Middle School, who are last year’s state champions in VEX Robotics, are continuing their winning ways in this year’s competition.

FLINT TWP. – Repeat! Repeat! MoPeeps, the robotics team at Carman-Ainsworth Middle School are the reigning state champions from the 2016-17 VEX Robotics Competition. They took their winning ways all the way to the world meet. Can they do it again?

But that’s not all. They also walked away with five of the seven trophies awarded including the Design Award, the Skills Champion Award and the Judges Award.

“We competed in a field of 17 teams including both high school and middle school teams,” Welch said. 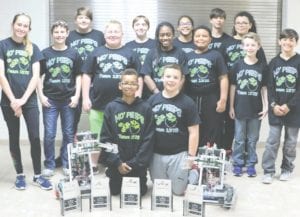 The team’s next competition will be in Monroe on October 28.

This year’s game, In the Zone, is played on a 12’x12’ square field. Two alliances – one “red” and one “blue” – each composed of two teams, compete in two-minutes matches— a fifteen second autonomous period followed by one minute and forty-five seconds of driver-controlled play. The object of the game is to move mobile goals into scoring zones to earn 5, 10 or 20 points. Teams can also score points by stacking cones on the goals and parking the robot. At the end of the match, the team that stacks the most cones in each scoring zone also gets bonus points for each zone.