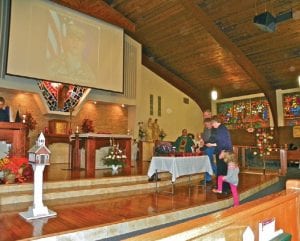 During a reading of names, families came up one by one to light a candle for loved ones serving in the military during a Military Mass of Appreciation held on Saturday at St. Pius X Church.

FLINT TWP. — As the names of their loved ones serving in the military were called, members of the congregation came forward to light a candle of prayer for peace and safety.

The solemn Reading of the Names candlelight ceremony held Saturday evening was the highlight of the eleventh annual Military Mass of Appreciation at St. Pius X parish.

The date also marked the 237th birthday of the United Marines Corps. and was the closest possible to Veteran’s Day, said Cindee McColley, SPX Director of Ministries.

St. Pius first held its Mass of Appreciation eleven years ago in response to the Sept. 11 terrorists attacks.

Saturday’s service opened with a prayer, flag ceremony and the “Star Spangled Banner.”

Opening thoughts presented in the program described the mass as a “prayer for peace, injustice, life and the hope to be in communion with the world.” 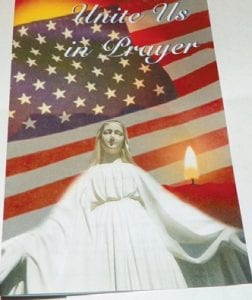 “Today we need to recommit ourselves to the ideals of what it means to be an American. That does not mean we are signing up for a particular viewpoint or political party. It is saying that we believe in freedom, we believe in fairness, and we believe in the dignity of every human being,” he said.

Paying tribute to the troops also recognizes that “we live in the best country in the world with its flaws and with it obvious imperfections,’’ he said.

Not every man or woman in the military will be called upon to make the ultimate sacrifice but their willingness to serve is a form of martyrdom, Fr. Copeland said.

He then asked for all veterans present to stand to be recognized. Then came the reading of 63 names of enlisted men and women submitted by both local family members and those living elsewhere, McColley said.

The service closed with the singing of “God Bless America.”

Also in attendance were representatives from Operation Care Package of Michigan, a non-profit organization that reports sending out 600- 700 care packages each month to soldiers and their families, at a cost ranging from $6,000 to $7000 a month.

They stressed their need for donations to help provide some holiday cheer to soldiers serving far away from home. For details about highly requested items on the Soldiers’ Wish List and how and where to donate, visit their web site at www.ocpmi.com.