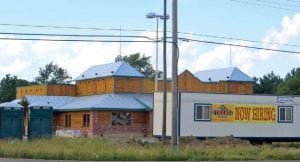 Inquire within. Texas Roadhouse on Miller Road is nearing completion and ready to hire staff.

FLINT TWP. — A “Now Hiring” banner hung on the construction trailer in front of the new Texas Roadhouse Restaurant, 4140 Miller Road, indicates that the long-awaited steakhouse will be opening soon.

Aug. 10 is the targeted opening date, according to a company representative. No additional hiring information is available because the official spokesperson is on vacation until June 29.

But applications can be submitted through a careers tab on the company’s web site at careers.texasroadhouse.com/#

Posted hourly jobs include meat cutter, line cook, prep cook, servers and hosts, Each restaurant employs a baker and a butcher, according to a Fact Sheet on the company website. Butchers, or meat cutters, hand cut every steak served. Working in 34-degree coolers, they cut an average of $1 million of meat per store, per year.

In 2013, Texas Roadhouse was named by Glassdoor as one of the Top 10 Best Places to Work, based on employee surveys.

Construction started on the Miller Road restaurant in March. Site plans were approved by the township Planning Commission last July and a Class C liquor license application was approved by the Flint Township Board in October.

The restaurant is a 7,162 square-foot standalone building. It is one of two buildings now under construction on a five-acre parcel just west of Curtis Drive on the north side of Miller Road, the former site of various car dealerships.

Based in Louisville, Ky., Texas Roadhouse is known for its hand-cut steaks and Western-themed decor. The chain currently operates 430 locations in 49 states and five international locations, according to the fact sheet.

Each restaurant averages 5,000 guests each week, which is among the highest in the industry. They serve about 300,000 meals per day. Steaks account for 44 percent of what’s on the menu.