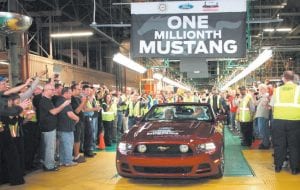 Employees at Ford’s Flat Rock Assembly Plant cheer as the plant’s one- millionth Mustang rolls off the line.

On that same day, another milestone took place: The one millionth Flat Rock Assembly Plant-built Mustang rolled off the line. The car has been built exclusively at Flat Rock since 2004.

From the time the car debuted in April 1964, Ford plants have produced more than 8.5 million Mustangs.

The celebration was marked by Raj Nair, group vice president for Global Product Development, who rode off the line in a Ruby Red 2014 Mustang convertible at the Flat Rock Assembly Plant.

“Mustang is one of the most beloved nameplates in the industry with fans around the world and throughout Ford Motor Company,” said Nair. “The team here at Flat Rock Assembly has built an outstanding reputation for quality while producing one million Mustangs over the last nine years – and we expect them to continue that for many years to come.”

The official 50th birthday of the Mustang is April 17, 2014. Ford is not saying if there will be any special celebrations, commemorations or promotions at that time.

Also fondly known as the Pony car, Mustang was assembled near Ford’s home base in Dearborn, at the famous Rouge factory, for four decades before the company moved production to Flat Rock in 2004.