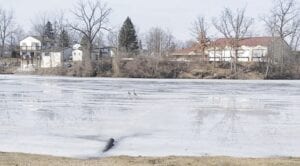 The Village of Goodrich owns the millpond and maintains the waterway, but there’s no official public access point. Some village officials hope to change that, if and when property becomes available. Photo by Lania Rocha

GOODRICH — Providing a public access point on the Goodrich Millpond is near the top of the wish list for some village officials, but it may take a long time to make that dream to come true.

“It’s definitely on the radar,” said Councilman Keith Walworth, “but we haven’t really discussed anything in particular.”

Walworth recently returned to the council after about a 15-year hiatus. He said one of the goals of his campaign was to work on obtaining access to the waterway. Soon after the election, a resident spoke up during the public comment portion of a council meeting, and asked village officials to look into their options.

“It’s a wonderful resource and I think everybody should have access to it,” Walworth said. “It would be beneficial to the entire community. I think we need to incorporation the millpond more into our village. It is definitely, without a doubt, something I want to work on.”

The village does own a “very small sliver” of land, formerly a Consumers Energy easement, near Huron and Ridge streets, he said.

“Although, where it is, there isn’t the incline,” Walworth explained. “It’s not really anywhere we could put a canoe or kayak launch or anything like that. We had talked about putting a bench there so people could sit and look out at the millpond. But it’s not a practical site (for public access) and there’s nowhere to park there.”

People do make use of other areas, such as the store at M-15 and Hegel Road, to access the millpond.

“There’s a rock embankment there that people fish off,” Walworth said. “And some people put canoes and kayaks in there, but it’s not an official launch site.”

The village owns the 46-acre millpond, having purchased it from the City of Flint in 1970. The pond is within the Flint Watershed, and it’s fed by Kearsley Creek.

At one time, the Detroit United Railway provided an electric streetcar line between Pontiac and Flint. The interurban route went through Goodrich, and the trolley trestles are still under the water of the millpond, Walworth said.

The cost for spraying around the pond, about $3,500 annually, and for public works personnel to open the floodgates when needed, comes out of the public coffers.

Walworth estimated that about 35 residences, including his, are situated at or near the shores of the pond.

He speaks fondly of the millpond, especially when describing the southern portion.

“The south side is just beautiful,” he said. “The sandhill cranes, when they migrate in the fall, they’re down there by the hundreds. The swans typically hang out on that end because they like to feed off the bottom. We get lots of geese, white egrets and all kinds of beautiful wildlife.”

When the water level is low, stumps poke up from the surface on the south side. The pond deepens toward the north side, and there are a couple of fairly deep holes near the dam. The bottom can be mucky, but it doesn’t stop folks from taking a swim now and then.

Walworth said his immediate neighbors are of the same mindset about providing more public access to the millpond. He’s not sure about other residents.

“There was some discussion about whether the homeowners would go for it,” he said. “When people are kayaking, or put a boat in there, I encourage it. I’ll go out on the deck and ask how they’re doing or if they’re catching anything.

“The millpond belongs to the village, and the people should have access. We just have to kind of wait and see if any property becomes available. If something does, it will definitely be up for discussion.”