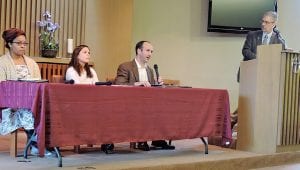 Panelists discuss the pros and cons of raising minimum wage at a community forum hosted by the Unitarian Universalist Congregation of Flint.

FLINT TWP. — Will a proposal to raise minimum wage to $10.10 an hour be put to voters on the November ballot?

The odds are good, according to Paul Rozycki, a Mott Community College Political Science professor, who led a panel discussion last weekend sponsored by the Flint Area League of Women Voters and other local groups.

Raising minimum wage is emerging as a major issue and maybe the hottest topic of this year, Rozycki said in his opening remarks.

President Barack Obama spoke of his efforts to raise minimum wage during an April 2 speech at the University of Michigan in Ann Arbor. Congressman Dan

Kildee is among politicians who have voiced support. Minimum wage began at 25 cents an hour in 1938 as part of President Franklin Delano Roosevelt’s New Deal, Rozycki said. Adjusted for inflation that is the equivalent of about $4.07 today. Over the years, minimum wage fluctuated from its lowest buying power of $3.81 in 1948 to its highest in 1968 at $10.56, he said.

There lies the core of the debate. Advocates for raising minimum wage say that families should be able to earn enough to support themselves.

Rozycki then turned the debate over to panelists: Chris Douglas, an economics professor at the University of Michigan- Flint and a Mackinac Center Scholar; Yannet Lathrop, policy analyst for the Michigan League for Public Policy and Nayyirah Shariff, a Flint small business owner and member of the Mothering Justice Board.

Douglas spoke against raising minimum wage and Lathrop and Shariff spoke in favor of it.

People living below poverty level also get other government assistance that resulted from a deliberate policy shift in the 1970s to provide an alternative to higher minimum wage, he said. Studies estimate that one million people could lose their jobs if minimum wage is raised to $10.10 an hour, he said.

Lathrop countered with statistics showing that nearly one million people in Michigan alone would be lifted above poverty level by increasing minimum wage to $10.10 per hour. The State of Michigan would save about $205 million in food stamp costs. Also people having more money in their pockets to spend would help the economy and could lead to the creation of 300 jobs, she said. “My position is basically that raising the minimum wage is good for the economy and families,’ she said.

She also spoke on behalf of tip workers in the fast food and restaurant industry who are paid as little as $2.65 per hour. A Michigan ballot proposal would seek to increase their wages to parity with minimum wage.

Shariff spoke about her life experiences as a divorced single mother and small business owner. As co-owner of a bread bakery, Shariff made a values-based decision to pay workers a living wage.

“Our work gives us dignity and part of that dignity is to be able to be self-sufficient,’’ she said.