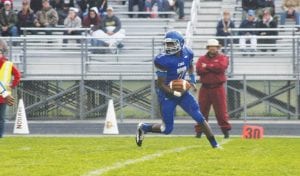 Carman-Ainsworth quarterback Tyler Minor has run for 666 yards and nine touchdowns in his last two games.

A week after running for 318 yards against Midland, Minor rushed for 348 yards and four touchdowns on 22 carries as the Cavaliers, 6-1, 4-1 SVL, rallied from a 20-14 halftime deficit, only the second time this season they have trailed at intermission. The victory set up a firstplace showdown with fifth-ranked Lapeer, 7-0, 5-0, this Friday at Carman-Ainsworth.

Bay City Central, 3-4, 2-3, stayed in the game on the passing of Dominic Zanotti, who hit 14-of-33 passes for 231 yards and three touchdowns. Zanotti threw two touchdown passes and ran for another as the Wolves took a 20-14 halftime lead.

Carman-Ainsworth stayed close on a 1-yard touchdown run by Nate Williams Jr. in the first quarter and Minor’s 41-yard run in the second period. 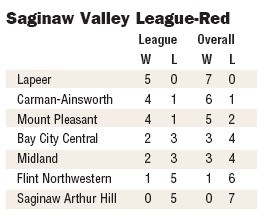 The Cavs then pulled away in the second half. Minor scored on runs of 65 and 14 yards to give them a 28-20 lead after three quarters. After Central pulled within 28-26 early in the fourth, Logan Banister returned the ensuing kickoff 70 yards for a touchdown and Minor ran in the twopoint conversion. Minor sealed the victory with an 88-yard touchdown run with 3:36 left, his second touchdown of that distance in two weeks.

Caleb Ruffin added 62 yards on 12 carries and Williams finished with 46 yards on eight attempts as the Cavs gained all their yards on the ground. Minor was 0-for-3 passing.

The Cavs outgained the Wolves 463-316 but hurt themselves with the two fumbles and an interception, plus 103 yards in penalties.