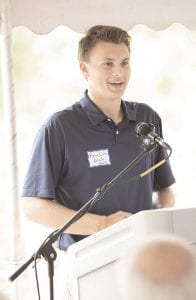 GENESEE COUNTY— Local children living with disabilities will soon be able to learn the game of baseball in a state-of-the-art ballpark, thanks in large part to the efforts of Brian Caine.

Caine, 19, is the founder and director of the Miracle League of Greater Flint (MLGF), a non-profit organization dedicated to creating opportunities for physical activity for children of all abilities. For several years, Caine has been raising awareness and support for the development of Genesee County’s first-fully accessible baseball field, which will serve kids with physical and emotional disabilities.

In recognition of his work to promote the Miracle League, the Flint and Genesee Chamber of Commerce presented Caine with the Young Professional Leader Award. Caine’s recognition came at the chamber’s Art of Achievement Awards ceremony, which was held at the Flint Institute of Arts on Nov. 7.

“It’s so nice to be recognized among people and business leaders who are making a change in the community,” Caine said. “Seeing what other people have accomplished has done so much to motivate me to get my project done.”

Caine’s organization, in partnership with Mundy Township, has designated a future location for the Miracle League ballfield at the new Hill Road Park recreational facility on W. Hill Road. Mundy Township has donated land for the field and is helping the MLGF to raise funds for the project.

Upon its completion, the Miracle League field will feature wheelchair-accessible dugouts, a universally designed pitcher’s mound and a durable rubberized turf surface that will reduce tripping hazards for crutches or wheelchairs. Caine said that the field will also incorporate color patterns and other assistive devices to create a supportive space where everyone can succeed.

“My vision is to give everyone a chance to be involved in physical activity,” he said. “Providing that opportunity for kids will not only help them, but it will also give their families something to get involved in and get excited about.”

Caine said that his inspiration to start the MLGF was birthed from his passions for baseball and mentoring. The Grand Blanc native played baseball for 14 years, including his freshman and sophomore years at Grand Blanc High School and for several seasons on the Michigan Mudcats travel baseball team. He has also volunteered to work with special education students since he was in fourth grade.

Now a sophomore at Central Michigan University, Caine has accelerated his dream to make the Miracle League ballfield a reality. Part of his mission has been to speak to various local service groups, such as Rotary Clubs, Lions Clubs and Knights of Columbus chapters.

“These organizations and groups have worked to spread the word about what we’re doing,” he said. “We appreciate everyone who has helped out with the league so far and donated to our cause.”

Caine said that the Miracle League field is expected to break ground in 2020. As part of the Hill Road Park facility, it will be centrally located near US 23, I-75 and I-475, serving as a focal point for the more than 10,000 children with disabilities in Genesee County.

To learn more about the Miracle League of Greater Flint, visit miracleleagueflint.org.