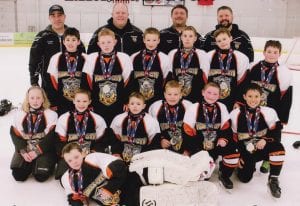 The Ice Hogs went 2-2-1 against teams from Connecticut, California, Minnesota and Michigan. That put them in the semifinals, where they beat a Minnesota team, 5-2. In the final, they lost to a Michigan team, the DSC Revolution, 5-1. Their only other loss of the tournament was also to the Revolution, 1-0.

The Vehicle City team includes players from Grand Blanc, Swartz Creek, Davison, Flushing and Otisville, all of whom were born in 2005.