MLK Day of Service draws diverse crowd to Davenport U 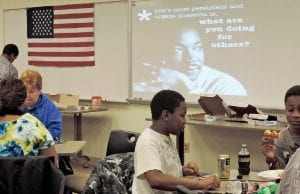 Under the watchful visage of Dr. Martin Luther King Jr., projected on a large screen, volunteers worked to make 400 paracord survival bracelets as part of Davenport University’s MLK Day of Service. Above, half of the finished bracelets were boxed for shipment to military personnel serving overseas.

FLINT TWP. — Jim Stewart, of Flint, a Vietnam veteran, and Donnell Underwood, a sixth grader at Carman- Ainsworth’s Randels Elementary School met for the first time on Monday. They sat together at the table of brotherhood to make paracord survival bracelets as part of the 2015 MLK Jr. National Day of Service at Davenport University.

“I am glad to be part of it,” said Stewart, who regularly supports local veterans’ efforts.

Stewart and Underwood were among about 50 volunteers who filled tables in Davenport’s community room as they undertook the task of wrapping lengths of nylon cord around cardboard boxes being used as looms to braid the sturdy bracelets.

Survival bracelets have been used by military personnel and civilians in a variety of emergency situations. They can lift up to 550 pounds and, when unwoven, have been used for tourniquets, shoelaces, fishing line, splints and more. 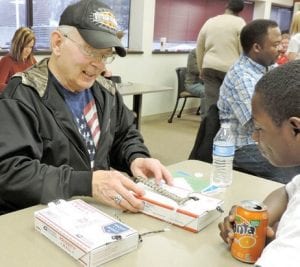 Jim Stewart, a Vietnam Veteran, helped Donnell Underwood, a sixth-grader at Randels Elementary School, as the two sat together weaving cord into survival bracelets to be donated to military personnel and first responders.

Half of the bracelets will be donated to Operation Gratitude to be included in care packages sent to military veterans, new recruits wounded warriors and to individually named U.S. service members deployed overseas.

The rest of the bracelets will be distributed locally to first responders including police, fire and EMT departments, Mitchell said. 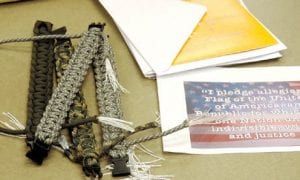