The Jeep and Mopar brands have once again teamed up to develop a variety of vehicles that will debut at the annual Easter Jeep Safari in Moab, Utah, April 8-16. Now in its 51st year, the event is attended by thousands of die-hard off-road enthusiasts looking to enjoy a week of serious off-roading on some of the country’s most well-known and challenging trails.

“It’s truly a labor of love for the Jeep team to develop exciting, capable concept vehicles each year for Moab and the Easter Jeep Safari,” said Mike Manley, Head of Jeep Brand – FCA Global. “We look forward to the reaction and feedback from enthusiasts and our most loyal customers as these new Jeep concepts are put through their paces on the trails in Moab.”

An array of production and prototype Jeep Performance Parts were used on this year’s collection of concept vehicles. The Mopar brand is responsible for developing, building and ensuring that all Jeep Performance Parts meet rigorous specifications and with 4×4 capabilities in mind, enabling Jeep owners to further enhance their stock vehicles. 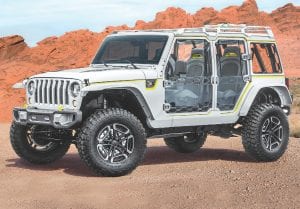 The Jeep Safari concept is all about bringing the outdoors in while keeping the doors and roof on.

“These concept vehicles are a perfect example of how off-road enthusiasts can use Jeep Performance Parts to personalize and enhance the already outstanding Jeep capability, allowing them to face the toughest trails in the world,” said Pietro Gorlier, Head of Parts and Service (Mopar), FCA – Global.

• Jeep Grand One, which celebrates the 25th anniversary of the Grand Cherokee with a modernized spin on a classic 1993 ZJ.

• Jeep Safari, a concept is all about bringing the outdoors in while keeping the doors and roof on.

• Jeep Trailpass, based on the all-new Jeep Compass, this concept vehicle takes the Compass Trailhawk a step further for an extreme off-road adventure. 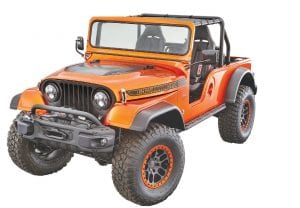 The Jeep CJ66 is a unique cocktail of three Jeep vehicle generations and demonstrates that new Mopar power applications are also available for those more at home on the trail than on the street.

• Jeep Switchback concept vehicle is equipped with an assortment of Mopar and Jeep Performance Parts for the ultimate in off-road performance.

• Jeep CJ66 — Take a Jeep Wrangler TJ frame, hang a 1966 Jeep Wrangler CJ universal Tuxedo Park body on it, add in Wrangler JK elements, power it all with a Mopar 345 Crate HEMI Engine Kit-enabled 5.7-liter HEMI and you have the Jeep CJ66.

Easter Jeep Safari consists of trail rides, mostly day-long trips, departing from Moab, Utah, throughout the nine-day-long event. The Jeep Safari was started in 1967 by the Moab Chamber of Commerce as a one-day trail ride. Over the years, as participation grew, the Safari expanded until it finally reached the current nine-day event. “Big Saturday” remains the culmination of the event on the Saturday of Easter weekend.