Mom and pop printing business opens with a zip 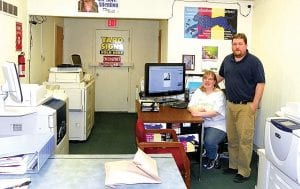 Zuddles the cheetah overlooks the workspace of Kelly and Carl Sharkey at their copy, design and printing shop.

FLINT TWP. — If the name of a new business on Bristol Road – Zuddles – doesn’t make you stop and wonder, then the bright colors and blue cheetah logo prominently displayed on the entrance sign and vehicle parked out front probably will get your attention.

Zuddles is the brainchild of Kelly Sharkey of Burton who owns the commercial design, print and copy center with her husband Carl.

Kelly created Zuddles, the blue spotted cheetah logo, for a design project she worked on as a college student. She resurrected the name for their business because it’s a way more attention-grabbing than “Kelly and Carl’s print shop,’’ she quipped.

Z also stands for zip as in the fast, affordable, professional copy and printing services Zuddles pledges to deliver to customers.

Between them, the Sharkeys have more than 30 years of experience in their line of work.

Carl, an information technology specialist and 1994 graduate of Carman-Ainsworth High School, handles all machine maintenance and repair. He started working on computers at age five at his father’s side. Now 36, he’s been working in print shops since age 17. 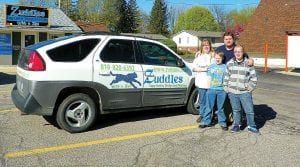 Kelly and Carl Sharkey, shown here with their children, extended their desigining ways to their automobile.

Kelly, a Bendle High School alumnus, started in the print shop where Carl worked but moved on to several big box printers including Kinkos and OfficeMax which she managed for five years.

Encouraged by friends and family, Kelly started working as a sideline in 2003 and went full-time in a homebased business in 2008. In January of this year, the couple opened their retail shop in a strip mall at 1342 W. Bristol Road.

When they say they are a full-service copy center, they mean it – including pickup and delivery. That aspect especially appeals to customers running busy offices – such as doctors and lawyers – who often can’t spare the personnel to make runs to the copy center during the day, Carl said.

Have laptop, will travel is just part of Zuddles’ efforts to provide very personal customer service.

The office is equipped with the latest, fastest copiers including one for do-it-yourselfers and one that can complete all operations. The latter recently enabled Kelly to quickly complete an order for informational booklets for the Genesee County Friend of the Court.

They can even put a photo on a tile square, said Carl, who showed one they made depicting his deceased mentor that is displayed in the shop with other people who have helped them.

The couple also did the customized design decal work themselves on their company vehicle which from a distance looks like a snazzy paint job. Kelly calls it a moving portfolio because it helps bring in business.

“Everyone turns to look,’’ she said of her colorfully logoed van. Even when she drives it to the grocery store, people stop her to ask “what’s a Zuddles?”

It’s a conversation starter that lets Kelly share information about the extensive range of services they offer.

“We’ve never had to turn a job down,’’ Carl said. “We really enjoy what we are doing.”

Regular business hours are 10 a.m. to 5 p.m. Monday through Friday and weekends by appointment but Carl said they often work outside of those hours and tell customers to “come on in, if the lights are on.’’ Zuddles can be reached at 810-820-6392.