‘Monumental’ donation given to U of M – Flint 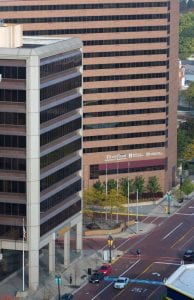 The Riverfront will provide housing options for 500 students.

FLINT – The University of Michigan – Flint is receiving one of the largest donations in its history: a 16-story building featuring academic space, student housing and a conference center.

Uptown Reinvestment Corporation (URC) is donating the 340,000-square-foot Riverfront Residence Hall & Banquet Center – a move approved Thursday by the University of Michigan Board of Regents. The donation is contingent upon completion of due diligence on the property.

“This donation is monumental,” said Chancellor Susan E. Borrego. “It’s a symbol of the many partners working together for the well-being of our community, and it helps to position the university for a new era of growth. We are prepared to build upon our tradition of academic excellence, to continue to provide student support and to serve as a catalyst for further revitalization downtown.”

Borrego noted that the Mott Foundation’s support for UM-Flint goes back to the very establishment of the university and has continued for more than 60 years.

“We want to help the University of Michigan – Flint grow,” said Ridgway White, president of the Mott Foundation. “As the university expands, it opens more doors to educational opportunity and creates a more vibrant and diverse experience for students. As an anchor institution in downtown Flint, it’s also a driving force in our community’s continued revitalization.”

“Strategically, it makes more sense for UM – Flint to manage the property,” said Tim Herman, president of URC. “Our role at URC is to take distressed buildings and develop them into properties that support the revitalization of downtown Flint. And we’ve accomplished that with the Riverfront property. Now, thanks to the generosity of the Mott Foundation, we can donate the facility to UM – Flint.”

The decision to accept the Riverfront property comes just two months after the University of Michigan Board of Regents authorized the purchase of one of FirstMerit Bank’s downtown buildings for $6 million. The Riverfront is next door to the FirstMerit Bank building and is connected to it through an elevated walking tunnel/bridge.

The Riverfront, constructed in 1981 as a Hyatt Regency Hotel, is a landmark downtown Flint building that will add to the existing campus footprint. Today, the renovated facility includes a movie theater, laundry facilities, fitness center, gaming area and community kitchen. It sits along the Flint River and the Flint River Walk, both of which run through campus, and it is directly across the street from the University Pavilion along Saginaw Street.

The Riverfront has the capacity to house more than 500 students. First Street Residence Hall, currently the only on-campus housing option, is home to 300 students. That facility opened in 2008 after five years of planning and a cost of $21.3 million.

In addition to providing UM – Flint with a significant increase in on-campus housing without the expense of building a new facility, the Riverfront includes a conference center, which can be rented for events of up to 1,200 guests. Riverfront already is home to the UM – Flint School of Business and is frequently used by the University for other functions. This also will save UM – Flint the annual cost of renting space in the building.