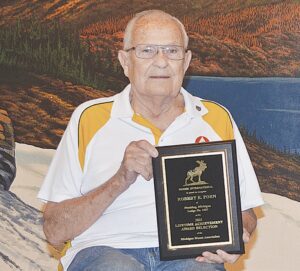 In recognition of Porn’s efforts, Moose International presented him with a Lifetime Achievement Award at a Michigan Moose convention in Sault St. Marie on Aug. 21.

“All the lodges have the ability to turn in a resume for someone they think is deserving of the award,” he said. “For Moose International to pick me out of all the candidates in the state…I was surprised and humbled.”

One of Porn’s other responsibilities at the lodge is to help generate contributions for two of Moose International’s major charity initiatives: Mooseheart, a residential childcare facility outside Chicago that was founded by the Moose fraternal organization; and Moosehaven, a private Moose membership retirement community/senior care facility located in Orange Park, FL.

Locally, Flushing Moose Lodge hosts an annual spaghetti dinner and bake sale for the Flushing High School Robotics team, raising up to $3,500 each year without charging the team for hall rental. The lodge also hosts fundraisers for the Old Newsboys, sponsors holes for golf tournament fundraisers and gives away Tommy Moose plush dolls that are used by police and first responders to comfort children at crime scenes.

“We have relaxed social quarters, a bar and many activities like a pool table, shuffleboard and darts,” he said. “We try to be the friendliest place in town.”