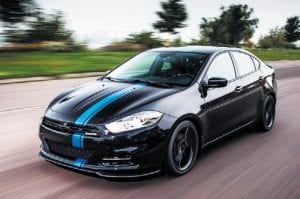 The Dart marks the fourth special-edition Mopar-badged vehicle created since the Chrysler partnered with Fiat in 2009.

Building on the success of the Mopar ’10 Challenger, Mopar ’11 Charger and the Mopar 2012 300, the limited edition Mopar 2013 Dart will be built and customized with Mopar performance parts and accessories. Production for a limited run of 500 units will begin this spring.

“For this special, limited-edition vehicle, we specifically kept the driver in mind as we added select Mopar parts and accessories” said Pietro Gorlier, president and CEO of Mopar.”

Inspired by the tuner scene, the Mopar 2013 Dart is designed for driving enthusiasts. Powered by a 1.4-liter MultiAir intercooled turbo engine with a manual transmission, the Mopar 2013 sports a gloss-black finish with a pair of car-length Mopar Blue stripes, which mirror each of the three previous Moparthemed models.

The exterior includes a Mopar badge in the crosshair grille and 18- inch wheels with Mopar logo on the wheel center caps.