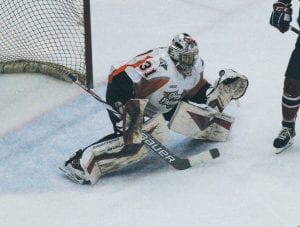 FLINT — Goaltender Brent Moran had the spotlight on him from the moment the Flint Firebirds traded for him, but he lived up to the billing at home on Tuesday. Although the Firebirds suffered a 3-2 overtime loss in an exciting game, Moran stole the show as he turned aside 52 of the 55 shots the Hamilton Bulldogs fired his way.

Hamilton got on the board early as Matthew Strome found the back of the net just 2:17 into the opening frame, which would be the only goal of a physical, penalty-filled first period.

Flint would draw even, but not until the 12:36 mark of the second period. A bizarre play in front of the Hamilton net somehow resulted in a penalty shot for the Firebirds, which was taken by Will Bitten.

Bitten pulled a backhand-to-forehand move and put it past Bulldogs netminder Charlie Graham for the lone goal of the second period. The game’s physicality continued and reached its peak during a lengthy and entertaining fight between Flint’s Connor Sills and Hamilton’s Brody Morris.

The game remained deadlocked until Hamilton’s Trent Fox buried one with less than five minutes remaining, taking the wind out of the Firebirds’ sails.

That didn’t last long, however. Flint’s Samuel Duchesne fired a wrist shot from the blue line, which was deflected into the net by Cullen Mercer just 37 seconds after Hamilton took the lead, forcing the game into overtime.

The extra period was exciting, but dominated by the Bulldogs. Eventually, the constant barrage of shots would beat Moran as Fox added his second of the night for the game-winner, sending the puck into the top shelf at 2:24 of the extra period.

The game was played before a near-capacity crowd of 3,904 at Flint’s Dort Federal Credit Union Event Center. In fact, Moran’s performance earned him the first star of the game, an honor rarely awarded to the losing goaltender.

The loss dropped Flint into last place in the West Division by just one point, currently standing at 14-16-2-2 for 32 points. The Saginaw Spirit are barely ahead of the Firebirds with 33 points and a record of 15-17-2-1. In fact, the Firebirds are only three points out of third place.

Flint is back in action at home this weekend with a pair of divisional games, beginning on Saturday with a 7:30 p.m. faceoff against the Windsor Spitfires. Sunday will bring a 5p.m. start as the Firebirds host the Sault Ste. Marie Greyhounds.