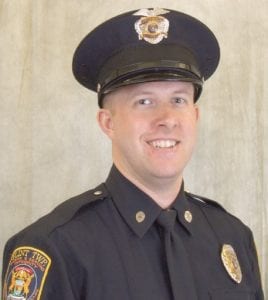 “That is one of the highest awards the association gives out,” said Flint Township Police Chief George Sippert.

The officers were recognized for their heroism in apprehending a gunman who shot Officer Schuyler and fired on Officer Paul in January in Flint Township.

“It’s a very well-deserved honor for Officer Paul,” said Swartz Creek Mayor David Krueger. “He went in there knowing one officer had already been shot and he could very well be next. He did a tremendous job and acted very heroically and professionally in the situation.”

Schuyler was shot when he attempted to arrest Christopher Aaron Washington on multiple misdemeanor warrants during a Jan. 23 traffic stop near the Hometown Inn on Miller Road. 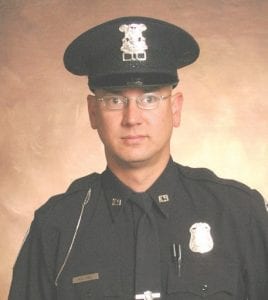 Officer Paul and Officer Terry VanKeuren Jr. responded to Schuyler’s call for backup, encountering the 55-year-old suspect behind the motel.

Washington allegedly fired several rounds at Officer Paul before smashing his vehicle into Officer Paul’s patrol car, trapping the officer inside the vehicle.

Prosecutors have charged Washington with 14 felony counts, including two counts of assault with intent to murder.

His trial is in limbo as attorneys for both sides await an Aug. 5 review of a competency report, court records show.

The Hometown Inn was shuttered for three months by order of the court due to what prosecutors called a history of drug use and trafficking, prostitution and violence on the premises.

It has since re-opened with new security measures in place.

“We are very proud of that,” he said.

The 100 Club is an organization of residents from the three counties who each year recognize and contribute money to support public servants including police officers, firefighters, FBI agents, Bureau of Alcohol, Tobacco, and Firearms agents and Drug Enforcement Administration agents.

Chief Sippert also said that Officer Schuyler still is recovering from his injuries and will not return to duty for at least a couple more months.