More housing to be built for low-income seniors 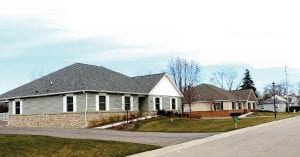 The township board gave unanimous support to FSAMM’s plan to acquire five more vacant lots on Larchmont from the Genesee County Landbank.

Each one-story house contains three separate one-bedroom apartments and some shared facilities that provide a home for seniors age 62 and older who are able to live alone with some support. FSAMM provides support services including laundry, light housekeeping, running errands and assistance with bathing or shopping.

Providing permanent supportive housing for low-income seniors is one of several programs offered by FSAMM, which was incorporated in 1945. With a goal in mind to help house needy seniors, it became a Community Housing Development Organization in August 2011.

With county, state and federal funding, FSAMM acquired land for the first two houses from the landbank and began construction in October 2013. A ribbon cutting took place in July 2014 and the apartments officially opened August 1, 2014, after an application period.

Demographics show a need for more housing of this kind as Baby Boomers age and live longer.

“Michigan’s age 60 and older population exceeds 2 million, has increased by over 50,000 in 2014 and will continue at that level of annual increases throughout the rest of the decade, according to the U.S. Census Bureau,’’ stated FSAMM in its formal written presentation. “This represents a growth rate of 141 more seniors each day. In contrast, every other age group is expected to decline. Michigan has more seniors age 60 or older than school age children ages 5 to 19.”

Trends indicate considerable growth in the number of Americans who will need long-term services and support in coming decades.

Tommasulo said the letter of support from the township board will be included in the funding application packet. FSAMM receives funding from the U.S. Department of Housing and Urban Development, the Michigan Community Housing Development Corporation and the Genesee County Metropolitan Planning Commission.