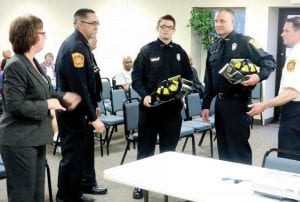 Two of three recent Fire Academy graduates were officially presented their helmets after being hired as on-call firefighters by the township board.

On Monday, the township board hired Charles Moran, Scott Webb and Bennie Griggs on a probationary status of one year. They completed and passed 295 hours of fire fighter training at the Genesee County Fire Academy, said Mike Burkley, assistant fire chief. Webb and Moran were present at the meeting and officially presented their helmets by Burkley and other fire officials. Griggs was not available because he was on vacation, Burkley said. The three men have started orientation within the department — covering, policies and operation procedures, he said. Burkley added that the fire department is actively looking for more men and women to join the ranks, particularly those available during the day time. Applications and more information are available on the township’s web site at www.flinttownship.org or at fire station 1 from 8am to 4:30pm Monday through Friday.

Applicants must pass a written test , a physical agility test, health screening, and successfully complete 295 hours at the fire academy, Burkley said. Recruiting and retaining on-call firefighters is an ongoing struggle for many fire departments.

The Township now has 23 oncall fire fighters, Burkley said he would like to increase that number to 30 by attracting at least three to four applicants to start training at the firefighter academy in the fall.