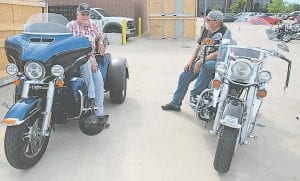 Bill Hundley, left, of Bancroft, and Jim Coan, of Flint, have a laugh over their adventures on Harleys in the parking lot Friday at Vehicle City Harley-Davidson’s Bike Night in Flint Township. Hundley, 67, and Coan, 71, have been riding since they were 14. Photos by Jalene Jameson

FLINT TWP. — A lot of people may have looked like characters who just walked out of a “Sons of Anarchy” episode, but the atmosphere at Vehicle City Harley- Davidson Bike Night was a G-rated version of the fictional town of Charming.

While the action was getting started inside the gates, buddies Bill Hundley, 67, of Bancroft, and Jim Coan, 71, of Flint, sat on their bikes outside the gates for a visit. Each one claimed the other was wanted by the law in several states, until Hundley finally admitted he was only wanted because he’s so sweet. The pair said they’ve been riding motorcycles since they were each 14 years old.

Hundley was sitting on a Harley 2018 Tri-Glide.

Asked what he likes about the three-wheeler, he said, “I don’t fall over as much, and my wife will ride this one with me.” 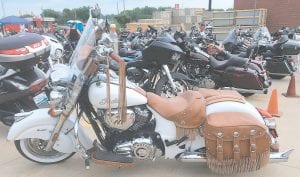 A tricked-out Indian was one of the more unique bikes in the parking lot Friday at Vehicle City Harley-Davidson’s Bike Night in Flint Township.

The guys try to get out to the Bike Nights every other Friday. They also like to come up during the week now and then and get their coffee and tell their stories. Coan has a 1992 Heritage with 153,000 miles on it. He said he’s driven Route 66 four times on the Heritage and gone around the country twice.

“It took him longer going around the other way,” Hundley joked.

Josh Randall and Brad Hanson, both of Burton, and Dan Ford of Swartz Creek were admiring Jason Murgas’ 2016 Dyna. Murgas, of Clio, bought the bike new and said people admire it for the bearings that are on it and the 117 engine. He owns three bikes and comes out to Bike Nights a couple of times a summer. 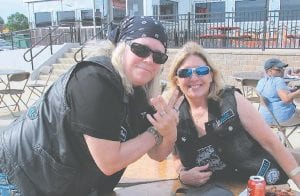 “I used to come out a lot more,” he said, between bites of food.

Inside the gates, there were eight food trucks parked around the lot for1: the first night of the Flint Township2: Downtown Development Authority’s3: Food Truck Festival.

Valli Metro of Mount Morris and Mary Flint of Flint Township were sampling the ribs from Smokin’ Aces BBQ.

“They’re outstanding,” Metro said of the ribs. “You gotta work at it a little bit, but they are good.”

“They must be, I’ve never seen them eat like that,” Flint teased.

Once Detroit Audio-Force started cranking out classic rock tunes, Robin “Bubbles” Goyette hit the pavement to get the dancing going to “We’re an American Band,” the Grand Funk Railroad hit. The 1970s band got its start in Flint.

“I’ve never heard this band before, but they’re good” she said. “I just like to dance and have a good time.”

Goyette, decked out in a vest with “Hogs in Ministry” and “Machine Gun Preacher” patches, was hanging with members of the Golgotha Motorcycle Club, a Christian bike club. But Bubbles was quick to point out she doesn’t ride behind anyone.

Goyette took a break to have a soda with the guys, then headed back out to shake it some more.

Vehicle City, 2400 Austins Parkway, holds Bike Nights every other Friday from 4 to 9 p.m. during the summer. Motorcycles of all kinds are on display, and prizes are awarded for the top three bikes overall in the Hot Bike Contest. Live bands play from 6 to 9 p.m. each date.