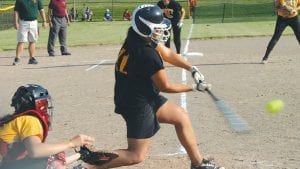 Last year, it was the Gold team that beat the Black team, 6-2, in softball, laying the foundation for the Black team to come back with a vengeance and take this year’s contest, 9-1. The game was actually a close one early on, as the Black took a 2-0 lead in the first inning, only to see the Gold cut that advantage to 2-1 in the second before the Black scored runs in the third and fourth to go up, 4-1. That’s when things went asunder for the Gold, as it got hit for five runs in the sixth to end up on the wrong side of an eight-run gap it simply was never able to bridge.

One factor working in the Black team’s favor was Bryant giving up just a run on two hits and no walks with nine strikeouts during the game’s first five innings before Woolard held the Gold team scoreless the rest of the way in this nine-inning affair. Pitching for the Gold were a host of players including Flint Southwestern’s Stevie Newton and Gerou. As for the game’s Most Valuable Players, Montrose shortstop Kassidi Adams had a three-run homerun for the Black team in that game-changing sixth inning and Deering had two singles for the Gold.

“The pitching was dominant for the Black team. Everybody had a good time and it was close until the Black broke the game open in the sixth,” said Mott head softball coach Rod Studaker. “It was a well-played game, especially defensively. There wasn’t more than one error on the night.”

Club All-Star Classic baseball game was played at Whaley Park on June 18 that featured the Gold team versus the Black team.

The Black team was coached by Lapeer East’s Larry Grumley and Ben Almasy of Mt. Morris. The Gold team was skippered by Tim Phipps of Flint Kearsley and Bob Foreback of Goodrich. The Gold team earned the victory, 7-6.

Lapeer East’s Tom McCarter was named Mr. Baseball for Genesee County by the Bruin Club and also earned the Best Pitcher award during the game with four strikeouts in three innings of work.

Matt Lawnstein of Flushing was named the MVP of the Black team by going 2-for-2 at the plate with three RBI.

The Gold team MVP was Goodrich’s Nick Glowacki, who hit a three-run homerun early in the game.

Lapeer West’s Mike Fearson was a member of the Gold team along with Matt Glowacki and Dan Broughton of Goodrich, Tyler Owen and Cody Wangler of Davison and Mike Lake and Mike Leshock of Grand Blanc.