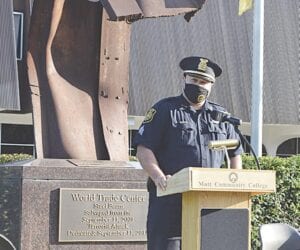 FLINT — Mott Community College and its Department of Public Safety hosted a 9/11 Remembrance ceremony last Friday to reflect upon the tragic events of Sept. 11, 2001.

A limited group of spectators, MCC security officers and local first responders gathered outside the Prahl College Center to mark the 19th Anniversary of 9/11 and pay their respects to those who lost their lives in a terrorist attack on the World Trade Center. The ceremony was held in front of Mott’s 9/11 memorial sculpture, which displays a twisted steel beam that was salvaged from the World Trade Center.

In her remarks, Walker-Griffea reminded audience members that Americans of all backgrounds and creeds united to grieve the events of 9/11, putting aside political and social differences to help the country heal. 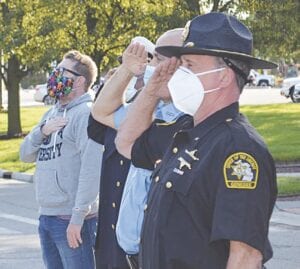 Officers and spectators saluting during the national anthem. Photo by Ben Gagnon

“When the attack happened on our soil, we came together without any polarization, saying ‘We’re going to fight this together,’” she said. “This is the kind of unity that we need to reclaim today.”

Walker-Griffea also said that institutions like MCC have a responsibility to educate students about the sacrifices that first responders made to save lives during 9/11. Over 400 emergency workers—including firefighters, police and medical personnel—were killed in the World Trade Center attack.

“From a historical perspective, we have to understand the importance of our police, fire departments and first responders in any kind of event or tragedy that occurs,” she said.

Chief Odette, who was a Burton police officer and a father of young children at the time of 9/11, said that it’s important for students at Mott to remember the significance of the tragedy and how it shaped the country’s history.

“Some of today’s incoming freshmen students weren’t even born when 9/11 happened,” he said. “It’s critical that we take the time and opportunities to educate them and to remind them that this could happen again.”

Nearly 3,000 people died on 9/11 when the Islamist terrorist group al-Qaeda coordinated a series of four attacks against the United States. Al-Qaeda terrorists hijacked and crashed two airliners into the World Trade Center in New York City and flew another airliner into the Pentagon in Arlington, VA. A fourth plane was flown toward Washington D.C. but crashed in a Pennsylvania field after passengers overpowered the hijackers.