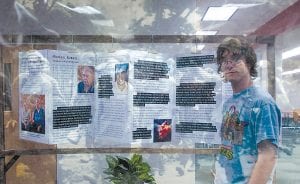 Student Ryan Martin looking back through a transparency at Recounting Memory: Flint-Area Holocaust Survivors & Youth Dialogue with History, a photo exhibit in the lobby of the newly renovated Mott Library, 1401 E. Court St. in Flint.

FLINT — An intriguing exhibit providing first-hand accounts from survivors of the Holocaust will be featured at the Mott Community College Library starting Monday, June 27.

Recounting Memory: Flint-Area Holocaust Survivors & Youth Dialogue with History, located in the lobby of the newly renovated Mott Library, 1401 E. Court St. in Flint, will be open to the public through Aug. 25 during regular library hours. The community is invited to a reception from 5-7 p.m. July 12. This event is free and open to the public. Light refreshments will be served.

Visitors to the Library will have an opportunity to read stories and view photos of survival on a large scale in this oral history project that brings together area students and Holocaust survivors. Students and faculty of MCC collaborated with local high school students and staff of Jewish Community Services of Flint to capture the stories of Flintarea Holocaust survivors who were immigrants from the former USSR.

First-hand accounts of survival during World War II were retold by five community members who had lived through this period as young children, culminating in an exhibit designed by MCC Graphic Design Professor Mara Jevera Fulmer.

The exhibit features material gathered from the interviews of area survivors, as well as reflective responses of the students, historical images and information. The exhibit also features excerpts of student participants’ reflections on their experience hearing these first-hand historical accounts. Video excerpts of the interviews are also planned to accompany the exhibit which features photographs and brief historical details to create contexts for the survivors’ stories.

One aspect of the exhibit that differs from others that address the Holocaust is the focus on survivors who were young children from the former Soviet Republic, especially during the initial Nazi invasion called Operation Barbarossa, Fulmer noted.

“The educational focus of this project demonstrates the rich opportunities for collaboration between MCC faculty and students and local organizations and high schools,” Fulmer said. “Flint-area high school seniors and MCC Design and Media students were engaged in conducting the interviews and hearing the stories of survival, hope, and overcoming racial and ethnic persecution, topics that still resonate loudly in today’s world.”

Jewish Community Services is publishing a catalog with the full interviews and essays by students and other participants, to accompany the exhibit as well. Leveraging the design and media arts areas of the college, students and facilitators captured the stories in photos and recordings which will be donated to the United States Holocaust Memorial Museum for their permanent archives.

“This exhibit also demonstrates how the college can partner with local non-profits to create opportunities for learning that can bring the lessons of history to life,” Fulmer added.

Fulmer acknowledged that parents and educators may be concerned about the content of the exhibit.

“While stories conveyed by survivors sometimes contain graphic violence, the exhibit was designed to convey them without the addition of graphic photographs from that period,” she explained. “The project team felt strongly that the stories from the survivors were about hope, and that further investigation can be done by the viewer to corroborate the details through research in the library and via sources such as the United States Holocaust Memorial Museum.”

The Recounting Memory: Flint- Area Holocaust Survivors & Youth Dialogue with History exhibit is funded in part by the Community Foundation of Greater Flint with additional support from Mott Community College. The exhibit will remain installed at the MCC Library through Aug. 25 with plans to travel to other locations as they become available.