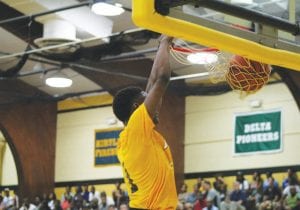 FLINT — As it has done for the past 22 years, the Bruin Club from Mott Community College in Flint hosted its annual Bruin Classic All-Star Games last week in boys’ basketball, girls’ basketball, baseball, softball and volleyball.

The most anticipated, as is the case in most years, was the boys’ basketball game last Thursday, which drew a record crowd of over 1,800 to MCC’s Ballenger Field House. The game resulted in a 114-102 victory for the Gold squad, which Lapeer West’s Matt Place was a part of.

Most Valuable Player honors were awarded to Amariontez Ivory- Thomas of Flint Beecher as he poured in a game-high 26 points. Flint Southwestern’s Malik Young was named the Player of the Game for the Black team with 20 points.

Carman-Ainsworth grad Cameron Morse scored 20 points of his own for the Black team while Swartz Creek’s Marquavian Stephens, also on the Black squad, added 17 points. Justice Green of Carman-Ainsworth came through for 14 points.

The girls’ contest wasn’t nearly as close with the Black team cruising to a dominant, 92-51, victory. Swartz Creek’s Imani Taylor was on top of her game with 23 points for the Black team while Davison’s Brooke Graham came up with 12 points, second on the Gold squad behind Bri Holscher of Linden.

On the baseball diamond, it was the Black team that was victorious, 4-3. Flushing’s Aaron Walker was named game MVP as a member of the Gold squad, going 2-for-2 with three RBI. Joel Perry of Holly hurled a pair of perfect frames with three strikeouts and Flushing’s Kyle Randick was named Mr. Baseball by the Bruin Club. Fenton’s James Castliglione threw two innings and recorded three fanned batters.

The softball portion ended in an 11-11 draw in the 10th inning. Competing locally were Brown City’s Stephanie Jurgess, Lapeer West’s Molly Brown, Kaylyn Buzzell and Mary Proulx, Davison’s Ashley Hackman and Ashley Rayner, Atherton’s Emily Ackerman and LakeVille’s Jessica Johnson and Ashley Simpson competed on the Gold team with Dean Sullivan of LakeVille serving as one of the coaches.