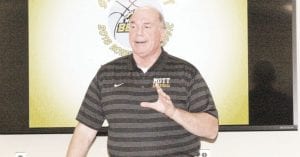 FLINT – For several years, the Coca-Cola Classic, which was hosted by the Flint Community Schools, was one of the best in the state, and the area’s only holiday basketball showcase. That went away with the consolidation of the Flint schools, but during a press conference at Mott Community College’s Ballenger Fieldhouse on Monday, the Steve Schmidt Roundball Classic was introduced.

Mott men’s basketball coach Steve Schmidt teamed up with local high schools to bring the annual event to Ballenger Fieldhouse, as he announced during the presser. Coaches, players and athletic directors from the inaugural schools were in attendance for the announcement and included Goodrich, Flint Beecher, Carman-Ainsworth and Flint Powers.

Each player and coach will be provided a souvenir T-shirt and a Most Valuable Player will be selected from each team.

“It really is an honor to, number one, host this tournament,” said Schmidt. “I am biased, but I think its one of, if not the best in the area as far as basketball venues. For people who have been to our games, it really is a special event. I want this to be something that student athletes will want to play in and coaches will want to coach in.”

The day-long event, which takes place on Thursday, Dec. 27, is split into two sessions. The first session begins at 1 p.m. with a girls’ hoops matchup between Flint Beecher and Flint Powers Catholic. At 2:30 p.m., the Powers boys will take on Goodrich.

The gym will be cleared after the first session, with the second session opening at 6 p.m. as the Carman-Ainsworth girls take on Goodrich. At 7:30 p.m., the festivities will conclude with a boys’ game between Beecher and Carman- Ainsworth.

“I want it to become a tremendous event,” added Schmidt. “Here at Mott, if we do something, we’re going to do it first class. We just renovated this half of the building with locker rooms. The gym has always been tremendous, and after 28 years (as MCC’s coach) we finally get new locker rooms. I really look forward to the games.”

Tickets will be $7 per session and will be on sale from Dec. 3-Dec. 21 at each of the participating schools. Fans are encouraged to get their tickets early as they are expected to go fast.