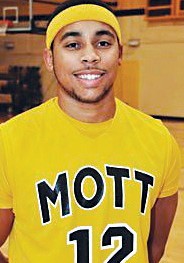 FLINT — The Mott Community College men’s basketball team is once again in the thick of things at the National Junior College Athletic Association (NJCAA) tournament.

Unlike previous years, most of Mott’s players on this year’s team are from out-of-state including Alabama, Illinois, South Carolina, Indiana, Texas and Tennessee. But one local player that spans our coverage area is Lapeer West graduate Anthony Sisson.

Sisson, a 2010 Lapeer West graduate, enters the final stretch of his career as a Mott Bear basketball player.

He played sparingly last year as a freshman for the Bears, who finished as national runners-up with a 33-3 record. He will look to cap his sophomore campaign for the Bears with a national championship for the top ranked Bears, 31-1 overall.

“Last year it was tough for me to crack the rotation because we had such good guards,” said Sisson. “My playing time is better this year, but we have seven or eight guards this year out of 13 guys. It’s better competition for me and my teammates.

“My role hasn’t changed much from last year. Coach (Steve Schmidt) has more confidence in me this year and knows I can shoot. My job is to come in and maintain. I can shoot and score and I need to just maintain on defense. We like to keep guys fresh since we run a full-court press.”

“Coach Schmidt taught me what it takes to win,” said Sisson. “The work after practice, the extra work during practice. He teaches us to work harder than our opponent. He also teaches discipline and makes sure we do well in classes. That wasn’t a problem for me since I got a scholarship after my first semester with a 4.0.”

Sisson plans on continuing his basketball career after Mott, but has nothing lined up as of now. He plans on working hard over the summer and knows Schmidt will help him land an opportunity at a bigger school.

“I feel I can keep up at the Divsion II level and I can beat D2 kids,” Sisson said. “Right now, D3 or NAIA (National Association of Intercollegiate Athletics) may be a better option for me, but coach really helps out putting people on teams. My goal, of course, wouldbetogoD1or2.”

Sisson did not know what to expect of his team this year and neither did his coach. “It was shaky at first,” said Sisson. “We went to a JUCO tournament in Indiana over the summer and we really didn’t know what we had. After we were undefeated through our first 13 games we knew we had something special. Coach didn’t even know what to expect and now we have put together the best record in Mott history entering the playoffs.

“He is very confident in our guard play because we have such quick guards. We really like to play our press and just keep going for the whole game. You can really wear down other teams that way.”

The Mott Community College basketball team opened the NJCAA tournament on Tuesday against Danville College in Danville, Ill. The Bears defeated Danville, 76-59, and moved on to the second round to face Louisburg at 6:30 p.m. today.

The Bears are the top ranked team in the field of 16. Grand Rapids Community College is the other Michigan squad in the field.

The Bears were District 9 and Region 12B champions this season, as well as Michigan Community College Athletic Association (MCCAA) champion.

The former Panther would love nothing more than to win a national title and move on to another program.

“I need to be smart about my future,” Sisson said. “I need to look at reality.”

Sisson has switched his major to general studies at Mott because he could not take any of the core classes he needed, but he plans on majoring in architectural engineering at his next destination.