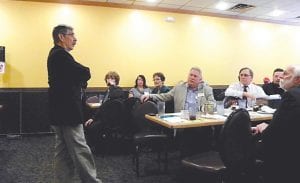 FLINT TWP. —All six statewide ballot proposals failed in the November election but that does not mean they will go away quietly, according to Paul Rozycki, a Mott Community College political science professor and local political pundit, who spoke last week at the West Flint Business Association meeting.

Proposals 1 and 2 concerning the emergency manager law and collective bargaining are two hot-button issues that may surface when the “lame duck” legislature reconvened this week, Rozyki said. He also predicted that Proposal 6 backers to restrict bridge building is not over. Manuel “Matty” Moroun, the multimillionaire owner of the Ambassador Bridge, will likely pursue his interests in court, Rozycki said.

One issue to watch for sure is the aftermath of Proposal 2 which sought to amend the state constitution to include collective bargaining rights.

Some people are interpreting voters’ defeat of Proposal 2 as a mandate for a Right to Work Law in Michigan, he said. Though Gov. Rick Snyder has said such a law is not on his agenda, there are state legislators who might work to push it through during the three-week lame duck legislative session that began Tuesday, Rozycki said.

Organized labor backed Proposal 2 as a preventative against Right to Work laws but the measure was defeated by a hefty margin,

“The question (now) is whether this will open the door, be a green light, for the Republican legislature to go ahead and start pushing for right to work legislation,” Rozycki said.

There are a number of legislators talking about it and may use the lame duck session to run it through quickly before the opposition gets a chance to organize, he said.

It would then go to Gov. Snyder for his approval.

“If there is a Right To Work Law passed in Michigan, it is going to be a very, very hot button this year,” Rozycki said.

“That is certainly worth watching and may be one of the implications of the failure of Proposal 2,’ he said.

The emergency manager issue is being tweaked for another run. Rozycki said he has seen a proposal in the pipeline similar to Public Act 4 which was shot down. The pending versions similar but includes some local controls included such as that a city council or other governing body would have to consent to an emergency manager voiding labor contracts.

Asked about the possibility of a Unigov system, like in Indiana, being set up in Michigan, Rozycki said he could see the need for district lines to be redrawn given dire financial circumstances that led to cities like Flint, Pontiac and Detroit being taken over by emergency managers.

Factors such as declining tax base and factories closing helped to create a perfect storm in Michigan cities that no emergency manager can fix by magic, Rozycki said.

One way to deal with it would be to redefine government, perhaps redrawing lines drawn 50 years ago. As the economy changes, how funds are raised for local government will probably have to change as well, he said.

Rozycki also said he is optimistic about the U.S. economy improving, and agrees with economists who forecast the creation of 12 million new jobs next year.

Rozycki also gave his take on the outcome of county proposals, which he said contained some surprises, and 10 reasons why President Barack Obama won re-election.

His Top 10 list of reasons why President Obama won were changing demographics including higher percentages of Hispanic and young voters; the auto bailout influencing Ohio and rust belt voters; Hurricane Sandy creating the October surprise and a presidential platform for President Obama; Democrats successfully defining Republican candidate Mitt Romney as a plutocrat out of touch with the average person; the legacies of former presidents Bill Clinton and George Bush; the death of Osama bin Laden; Obama’s more appealing personality; a small uptick in the economy just before the election; a higher than anticipated voter turnout and the Obama teams effective ground game.

Overall, it was a successful election despite fears the candidates would split the electoral and popular votes or that there would be extensive recounts in Ohio or other key spots.

A three percent difference in voting would have shifted the outcome in the Republicans court, Rozycki said.

Regardless, of the outcome, we still remain a divided electorate with serious implications for the future, he said.