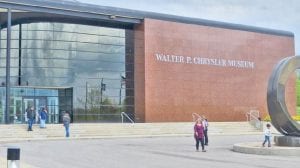 Motus Historia (Latin for history in motion) greets visitors in front of the W.P. Chrysler Museum in Auburn Hills that will reopen to the public next month on a limited schedule.

AUBURN HILLS — Since September 2013, a bronzed statue of automotive pioneer Walter P. Chrysler has been on permanent display at Bishop International Airport, sponsored by the local Back to the Bricks car show organization.

Now there is a small window of opportunity for vintage car fans and automotive history buffs to learn more about Chrysler’s car company with the reopening of the Walter P. Chrysler Museum in Auburn Hills.

Opened in 1999, the museum closed to the public in 2012. It will reopen to the public this year for a few select weekends beginning June 4 and 5 from 10 a.m. to 4 p.m. The complete schedule for the rest of the year is available at www.wpchryslermuseum.org/pdf/Website_ Public_ Dates_ and_ Admission.pdf

The three-level building holds a lot of Chrysler history. Displays offer something for everyone including NASCAR racing vehicles, World War Two tanks and equipment, cars featured in movies and more. 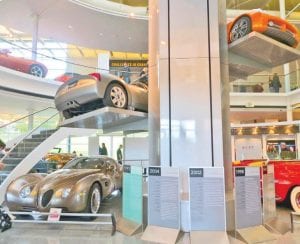 Chrysler vehicles old and new are part of a display in the two-story atrium of the three-level Chrysler Museum.

Women might get a kick of seeing La Comtesse, a bright pink concept car that debuted in 1954 and was designed to appeal to women. Chrysler vehicle fans will recognize old favorites like the Viper and the Prowler.

Historians have said that Chrysler lived in Flint circa 1912- 1919 while working for Buick. He moved on to Detroit by 1925 to start his own company. 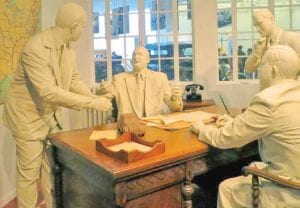 Statues of Walter P. Chrysler and his design team are one of the displays at the Chrysler Museum set to reopen to the public next month on a limited schedule.