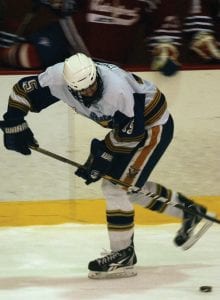 Charles Chamberlain had a goal and two assists for the Junior Generals in Cleveland.

WOOSTER, OH — The Mountain Cats had a rough weekend, as they took on the Wooster Oilers three times and dropped two of the decisions in Great Lakes Junior Hockey League action.

On Sunday, the Cats and Oilers played in a matinee game at 1p.m. and the host Oilers took a convincing 4-1 victory. The Mountain Cats fell behind, 4-0, in the game before finally finding the net on a power-play goal by Bryant Danielson off an assist by Cameron Dimmitt with 9:56 remaining in the game. Shots were 42-31 in favor of Wooster and Mountain Cats goalie Robert Martin had 38 saves in the game.

The Mountain Cats got off to a better start in Saturday’s match up as the teams each scored two goals in the first period. Wooster took the early lead on a power-play goal by Jordan Roemer from Maxwell Hagerman by way of Ian Reffert at the 11:59 mark. The Mountain Cats evened the score when Zachary Collins scored at 14:22 off an assist by Bryant Danielson. Roemer again lit the lamp for Wooster at 18:21 for the 2-1 lead, but again the Cats battled back with a goal by Danielson from Collins and Cameron Dimmitt at 19:46.

Wooster scored the next two goals before Johnathon Arms put in a power-play goal from Michael Potes and Dimmitt at 14:56. From there, it was all Wooster as it scored two more goals for the 6-3 finish.

Anthony Munoz took the loss for the Mountain Cats in net as he stopped 45 of the 51 shots he faced. Timothy Gearhart of Wooster stopped 23-of-26 for the Oilers.

The Mountain Cats started the weekend off right however, as they took the initial game against Wooster, 6-5. The Mountain Cats jumped out to a 4-1 lead in the first period and kept piling it on in the second for the win.

Danielson scored first at 3:53 off an assist from Dimmitt, then David Salazar lit the lamp thanks to Johnathon Arms at 4:35. Danielson then got his second of the game again thanks to Dimmitt, before Wooster was able to get on the board on an unassisted goals from Roemer at 14:24.

Collins then scored on a power-play goal at 16:12 assisted by Dimmitt and Danielson.

Wooster then scored in the second before a pair of goals by Dimmitt, the first on a powerplay from Salazar, and the second a short-handed goal from Kyle Barden at 14:01. Martin was in net for the Mountain Cats in the game and had 38 saves on 43 shots. Lee Anderson took the loss for Wooster, stopping 22-of-28 shots.