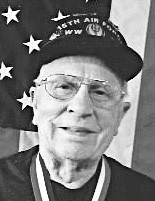 MR. HOWARD CASEY, WWII Veteran, 97, of Grand Blanc, passed away Saturday, June 5, 2021. In accordance with Howard’s wishes cremation has taken place. To honor Howard a burial with military honors will take place at 11 a.m. on Tuesday, June 15, 2021, at Great Lakes National Cemetery. The family will be present to receive friends from 9:30 a.m. until 10:30 a.m. at Martin Funeral, Cremation & Tribute Services in Grand Blanc. Those desiring can direct memorial contributions to the 1% Veteran Food Pantry or to the Great Flint Dog Outreach and Rescue, envelopes will be available at the funeral home. Condolences may be shared with the family at martinfuneralhome.com

Howard was born and raised in Detroit and spent many summers in Harbor Springs growing up. He was a WWII vet and a POW. He married his high school sweetheart Gloria while on leave, and they were married for 52 years until her death in 1996. Upon his return to civilian life, Howard attended Michigan State University for agriculture and worked on a fruit orchard. Howard and his wife, Gloria then moved to Washington State where he worked as a pea and wheat rancher. They eventually moved back to Michigan where he was trained to be a master craftsman in wood and metal. Howard then landed a job working for General Motors at the Tech Center in Warren for 39 years, living in Shelby Twp., before retiring to Manitou Springs, Colorado with his wife.

Howard was a brave and selfless man who had many adventures in his lifetime. He was shot down twice on a B-24 as a ball turret gunner and survived being a POW, receiving the Aerial Combat Medal and the POW Medal. In 1952, he was in a train crash and saved the engineers who were close to drowning in the river where the train landed. Howard helped his wife recover from a life-threatening auto accident, helping her to walk again and standing by her through her many health issues. He was responsible for taking a class action suit against the UAW for wrongful termination of seniority to the US Supreme Court, a case that took twelve years until they were awarded back seniority. Howard was a man who always stood up for the right thing. He was the neighbor who would be the first out with the snowblower or plow, clearing everybody’s walks and driveways, still doing it at age 88. He was a hard worker his whole life. Howard was always generous with his time and money, giving to many charities, especially military charities. He gave money for the WWII monument in Washington, DC, and received special recognition. Howard was involved with many WWII groups and hosted many reunions over the years. He helped the Tuskegee Airmen with their reunion, and they made him an honorary P51 Pilot Association member for life. Howard was honored to meet the crew that flew beside him all these years later. He supported the Tuskegee Education Fund. Howard often spoke with children at schools, telling his WWII story. He was asked to speak at the graduation ceremony at the USAFA where he was responsible for getting a plaque placed in the cemetery for his 460th Bomb Group. Howard was an Honor Flight Recipient and said it was one of the highlight trips of his life. His story can be found on Timeless Voices of Aviation, stored in Washington, DC. After his wife’s death, Howard became a member of the Manitou Springs Kiwanis, earning the Kiwanian of the Year Award in 1999. He was responsible for cooking all the spaghetti every year for the Pike’s Peak Race held yearly for runners. He was known as the “spaghetti man.” Howard was always an excellent cook and secretly always wanted to be a chef. He was a lifetime NRA member and believed strongly in the 2nd amendment. He was an avid fisherman, golfer, and hunter in his younger years. He could fix anything. Howard will always be remembered for his never-ending humor, his love of cars, guns, hockey, clocks, and animals. The staff wherever he lived just loved him. Howard always had a smile and was grateful for their loving care. Our special thanks to them, wherever they may be.

He was preceded in death by his wife, Gloria; parents, Howard and Lillian Casey; and his sister, Geraldine Veryser.