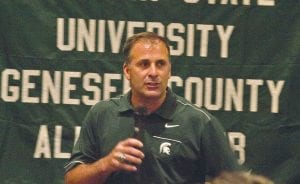 Sparty was in the house along with the MSU cheerleaders and members of the MSU GCAC, who gave annual recipients of the 2012 MSU scholarship awards a larger-than-life experience. The event ran 6-8 p.m. and cost $20 per person that included dinner, the honors program and non-alcoholic beverages.

Narduzzi, in his sixth season as defensive coordinator, has Goodrich grad Kyler Elsworth as part of his special teams’ stable. Narduzzi has done what MSU best defined as “developed the Spartans into one of the top defensive teams in the nation.”

The foundation of Michigan State’s defense is stopping the run, and Narduzzi’s unit once again proved it could stop the rush in 2011, ranking first in the Big Ten and ninth in the nation, allowing just 100.5 yards per game. Four teams–FAU, CMU, Ohio State, Georgia–posted their season lows in rushing against the Spartans, and MSU held seven opponents to under-100 yards rushing. MSU has finished in the top 30 nationally in rushing defense three of the past five seasons, 30th in 2007; 24th in 2009.

For the second year in a row, Narduzzi was named the National Coordinator of the Week by Rivals.com following Michigan State’s victory over Michigan. The Spartans held Michigan to regularseason lows in total offense with 250 yards, 82 rushing and 14 points in 2011.

To get back on track with the local chapter, log on to www.MSU-GCAC.com