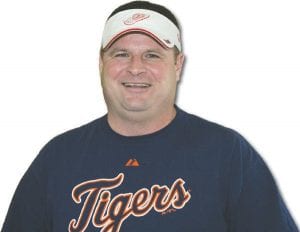 I saw this play on the months of the year and really liked it. It goes January, February, Izzo, April, May… and yes, the Spartans have done it again! Final Four baby!

The Michigan State Spartans are Indianapolis bound. The No. 7-seeded Spartans knocked off the Louisville Cardinals in overtime 76-70 on Sunday. The fact MSU was seeded seventh was a complete joke, I must say. Tom Izzo is leading the Spartans to the Final Four for his seventh time in 16 years. Tom has done his best coaching job this season, as this is not one of his stronger basketball teams.

The play of Travis Trice cannot be praised enough. Trice is making shots from all over the court and his leadership skills have been tremendous.

The next task on hand is the Duke Blue Devils, a No. 1-seed. Duke rolled Utah and Gonzaga this past weekend. Duke has been installed as a five-point favorite over MSU.

The Spartans have an excellent chance to pull off an upset, I think. MSU needs to limit the dumb turnovers, play hardnosed defense, and make its free throws at the charity stripe! Those three things done right will propel MSU into the Monday night championship game. However, I think the Duke team wins in a close game. Fat Guy cheese ball says: Mar Ma Duke 64 and No Sparty Party 60.

The Wisconsin Badgers are the second Big Ten team in the Final Four, by the way, for those who thought the Big Ten was weak this year. Take that naysayers. The Badgers draw the Kentucky Wildcats, the team trying to complete the 40-0 season. The Badgers have a punchers chance to win, I believe. Wisconsin should watch the tape of the Notre Dame game. The Fighting Irish had Kentucky on the ropes but failed to deliver the knock-out punch. Fat Guy says: Perfect Season 59 and Dairy Land 54. The championship game Monday night will be Kentucky 63 and Duke 56 and Kentucky completes the 40-0 season.

The Detroit Red Wings. Are they in danger of missing the playoffs? If you would have asked a month ago, the answer was, heck, no! The answer here at the end of March is totally different. It’s a possibility for sure.

The goalie position I talked about a while back has reared its ugly head for the Red Wings. The goalie has been a “Dead Thing” between the pipes. Jimmy Howard nor Petr Mrazek want the No. 1 goaltending job. The two goalies have been given numerous chances to step up and be the No. 1-man. I don’t believe either guy has much confidence in the cage.

I mean, come on, Detroit scores four goals in two separate games and the team loses both games?

That is absolutely pitiful and unacceptable.

Let’s also put some blame on the Wings’ lack of defense, too.

Detroit coughs up the puck like a cat with a hairball in its throat way too often. The clearing of the defensive zone and careless passing of the puck has been very subpar lately.

The Red Wings have the Ottawa Senators (Tuesday Night) and the Boston Bruins on Thursday night at the “Joe”. These are a two-game playoff series in my opinion. Detroit needs to win both! I cannot stand the thought of Detroit missing the playoffs. The thought of it makes me mad, to be honest. I need playoff hockey in Hockeytown!

The National Holiday of Opening Day is Monday in Motown.

The Minnesota Twins will open the season against our Detroit “Ole English D” Tigers.

How about David Price named Opening Day starter over Justin Verlander? Do you agree with manager Brad Ausmus in his decision? I do.

Justin Verlander, as much as I hate to say this, is not the “Ace” of this staff like he once was. I think J.V.’s better pitching days are in the rear view mirror.

I really hope I am wrong, but I don’t believe I am.

The bullpen issues have not been resolved from last year, either. It will be worse, I think. Joe “Coney Island” Nathan has zero sauce on his fastball anymore.

The boos for him will be loud and often. Hey, Detroit Tigers, it’s time to PLAY BALL! thefatguy@mihomepaper.com