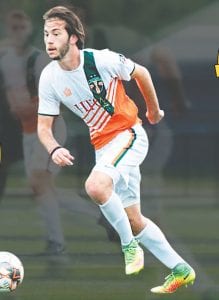 Giuseppe Barone will take the field for the Flint City Bucks for the third-straight season.

FLINT — The Flint City Bucks USL League Two soccer team has announced the return of Michigan State midfielder, Giuseppe Barone (No. 10) to the team’s 2019 roster for the third consecutive summer.

“Giuseppe leads a returning cast of several Major League Soccer (MLS) top prospects to Flint this summer and we look forward to him leading our potent offense that should lead to lots of goals scored this summer”, said Bucks head coach Demir Muftari. “He was an outstanding piece of our midfield last summer and did a phenomenal job at Michigan State this past fall, leading them to the NCAA Final Four.”

Barone, who will enter his senior season at Michigan State University in the fall, recently earned the prestigious 2018 Big Ten Midfielder of the Year award. He also garnered first-team All-Big Ten honors. As a freshman, Barone was named Big Ten Freshman of the Year.

The Grandville, Mich. native played in 10 games for the Bucks last season, scoring twice and adding two assists, including 17 shots, in 702 minutes of action. Barone, a 5-foot-9, 160-pound runner, was also named a semifinalist for the MAC Hermann Trophy this past fall, which is the most coveted individual honor in NCAA Division I soccer and has been awarded annually since 1967.

“Playing with the Bucks each summer is a unique experience that allows me to play with some of the best college players from all over the country and around the world. Playing and training every day with All-Americans and top caliber players who share the same goal of playing in MLS helps us all each and every day. The Bucks experience is important to help us prepare for the next level,” said Barone.

The Flint City Bucks will begin their inaugural season in Flint at Kettering University’s historic Atwood Stadium in a pre-season friendly match against Detroit City FC. Kickoff is set for 7