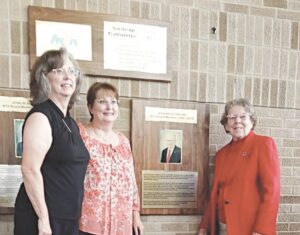 Former Swartz Creek Mayor Richard B. Abrams was one of two men posthumously honored with the renaming of the MTA Transit Center in downtown Flint. Abrams’ daughters, Penny Messer and Sandi Brill, and wife, Boots Abrams, say he would have been humbled by the recognition. Photo by Lania Rocha

FLINT — Richard B. Abrams wore many hats in service to his community; so much so that, although he’s been gone for nearly two years, he continues to receive accolades for his contributions.

Abrams, former Swartz Creek mayor, was one of two men posthumously honored Sunday, Sept. 12, with the renaming and dedication of the MTA Transit Center, now the Northrup-Abrams Transportation Center, located on Harrison Street in downtown Flint.

The name also recognizes former Flint city councilman and county commissioner John Northrup. Together, Abrams and Northrup dedicated more than 62 years as members of the MTA board of directors, and were instrumental in securing the necessary funding to expand transportation services throughout the county.

“Dick would be so humbled by this,” said Abrams’ wife, Boots. “He never did anything for praise. He just did what needed to be done. He was such a good person.”

“I’m so proud of my dad,” said Penny Messer, one of Abrams’ two daughters. “And I miss him so much. I wish he was here to see this, but it would probably be like it was with (the renaming of Winshall Park to Abrams Park). He just couldn’t believe it.”

Abrams made many contributions toward shaping the Swartz Creek community, but he took it all in stride.

“He just didn’t realize what he did,” Messer said. “He did everything from the heart.”

Ed Benning, MTA general manager and CEO, said both Abrams and Northrup were “very dedicated” to the MTA mission. Both were instrumental in promoting the millages that have allowed MTA to improve its facilities and services within the City of Flint and in the out-county.

Their efforts helped create the MTA as it is today, a model for public transportation throughout the country.

In 2019, the Genesee County MTA was named the Urban System of the Year, beating out about 3,500 other transportation systems nationwide.

“In my time working with John Northrup and Richard Abrams, they were extremely supportive of what we were trying to do,” Benning said.

Many of the programs instituted under Abrams’ and Northrup’s watch have improved the quality of life for thousands of residents, he said. When MTA officials saw that major grocers were pulling out of Flint, they realized many residents were left with no access to food stores. They responded by developing a new route specifically designed to get people to the remaining grocery stores.

In 2016, MTA began the Rides to Wellness program, which now serves as a model for the entire nation, Benning said.

“It comes down to taking care of the people of this community, and they (Northrup and Abrams) supported us all along the way,” he said. “It is an honor to honor both of these individuals who have done so much for the community. They went way beyond anyone’s expectations.”

He also was a member of the Kiwanis Club of Swartz Creek, the Crossroads Village Advisory Board, the Swartz Creek Downtown Development Authority, American Legion Post 294, the Small Cities and Villages Association, Swartz Creek Area Fire Board, United Methodist Church of Swartz Creek, and Flint Male Chorus, among other organizations.

Abrams served in the U.S. Army as a corporal and medic during the Korean War.