A ribbon cutting was held for the Mundy Miracle Commons Recreation Area and its new 1.8-mile nature trail. Photos by Ben Gagnon

MUNDY TWP. — Mundy Township’s vision for a barrier free outdoor destination has moved one step closer to completion with the official unveiling of a new walking trail.

Township officials, along with Miracle League of Greater Flint organizers, held a ribbon cutting on June 10 for the Mundy Miracle Commons Recreation Area, which is located off Hill Road between Van Slyke and Fenton roads. A grand opening was also held for the park’s new nature trail, a paved 1.8- mile pathway that loops through scenic wooded and wetland areas.

The path, which opened in January along with the 99-acre complex, is also fully accessible for people with disabilities.

With the nature trail complete, park planners are now envisioning the development of a pavilion, a Japanese garden, an amphitheater, a permanent art gallery and a barrier free playground at the park. Traditional baseball fields, soccer fields, handicap accessible bathrooms and a concession stand are also in the works. 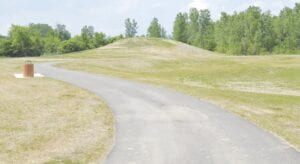 Ketzler said that the park’s considerable space offers a great venue for events like concerts or Shakespeare in the Park, while the Japanese garden could be used for weddings, tai chi and yoga classes. Residents and park patrons can expand the park’s vision by sponsoring future buildings and venues on the site.

“To make this vision possible, we have uncommon friends, which are people who are volunteering to do things (at the park),” Ketzler said. “And we have uncommon opportunities for people to put their footprint on the property, whether it’s a rosebush in memory of their Grandma or a stage for the theater.”

Mundy Miracle Commons is also the future home of the Miracle League Baseball Field—which will be a fully accessible baseball facility for kids and adults with special needs.

Mundy Township officials, in conjunction with the Miracle League of Greater Flint, broke ground on the baseball field two years ago and are hoping to have the facility fully constructed in time for games next year.

Brian Caine, founder and director of the Miracle League of Greater Flint, said that nearly 10,000 area kids will benefit from the field and learning the game of baseball in a safe, accessible environment, while also getting to experience the park’s other recreational offerings.

“This facility is a place for everyone,” he said. “We want to make sure that people are coming out here not just for the Miracle League but also to enjoy life.”