Music has been the best medicine for this year’s Mrs. J. Dallas Dort Award winner 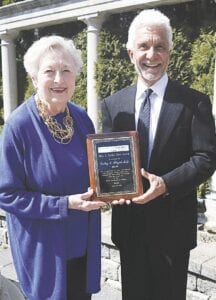 FLINT — Dr. Cathy Blight said she thinks music is a calming, mind-expanding thing. For her, it gives sense, purpose and direction to life, especially when times are challenging. Music is a grounding entity, she feels.

Blight is the recipient of the 2020 Mrs. J. Dallas Dort Award. Established in 1979 to recognize people who have given substantially of their personal time toward the successful development of the Flint Institute of Music, it is named in honor of Marcia Webb Dort, wife of Josiah Dallas Dort.

Marcia was known for her tireless volunteer work in the arts community. Blight joins a long line of distinguished recipients who have made the Flint Institute of Music the beneficiary of their philanthropic time and efforts, according to FIM President and CEO Rodney Lontine.

She was honored at the Flint Symphony Orchestra’s recent concert on May 8.

“I’m incredibly honored. When I look at the people who’ve received it, I think they’ve done more than I have,” said Blight. “It’s a big, big honor.”

Blight is currently secretary of the FIM board. She’s also been the chair of the FSO’s Artistic Advisory Committee for four years. Community service is very important to her. She sees it as a way to give back to her neighbors and those who have helped her succeed as a physician.

Blight retired from Hurley Medical Center in 2018, where she’d been medical director of the department of pathology and laboratory medicine for 20 years.

A Flint resident, Blight is on the Genesee County Humane Society board, including being its past president. Currently, she is chair of its personnel committee. Blight was also active with the Genesee County Medical Society Board, Michigan Hospice Organization, and the United Way of Genesee County.

She is also a member of the College of American Pathologists and past president of the Michigan State Medical Society. A ceiling-breaker, she received the first Female Physician of the Year Award from MSMS. Blight is also a 1999 Michigan State University Distinguished Alumni Award recipient.

Dallas Dort, whose grandmother is the namesake of the award, has nothing but praise for Blight.

“She’s a wonderful supporter of FIM. She’s put a lot of time and energy into it. I also find her a very capable, smart team player,” he shared.

Interestingly, Blight has a personal connection to Marcia Dort. Marcia and her husband, Josiah, were best friends with Blight’s in-laws. Blight’s husband, Ed Davison, is the same age as one of the Dort’s grandchildren, Charlie.

“The Flint Institute of Music is very grateful to Blight for her years of service. It’s an honor to have her as the newest Mrs. J. Dallas Dort Award winner,” said Lontine.