Music in the Park offers reminiscence for seniors, celebration for youth 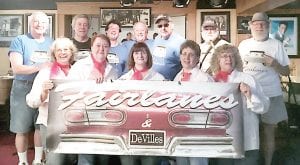 The Fairlanes are a fun-loving ‘50s and ‘60s band that perform along with a female group called The DeVilles. Photos provided

BURTON — Burton Rotary Club presents Music in the Park from 6-8 p.m. Sept. 13 at the Davison Roadside Park as a community outreach.

“We wanted to do something more for the community and invite them to enjoy an evening with music, and we’re also serving complimentary hot dogs, chips and bottled water to everyone that comes to the picnic,” said Jon Ragnone, president of the Burton Rotary Club.

The Fairlanes, a group that performs songs from the ‘50s and ‘60s, will perform at the event.

The group started in 1972 as the Half Ton Pick Up. The members had all grown up in the ‘50s. They liked ‘50s music and there was a talent show at the school the members were teachers at. They dressed the part, performing “Hound Dog” by Elvis Presley, “Don’t You Just Know It” by Clarence “Frogman” Henry and “Yakety Yack” by the Coasters to name a few and soon people were calling to book the group. The first band broke up, then later was reinvented as The Fairlanes.

The group still perform a lot of Elvis and Chuck Berry songs and has about 200 songs. They perform in parks, car shows, theatres, private parties, senior citizen centers, senior assisted living facilities and sometimes fairs, church festivals, bars and bar mitzvahs along with a female group called The DeVilles. They expect to perform at Past Tense in Lapeer in October.

Ragnone said The Fairlanes also perform at the Burton Rotary Club’s Harvest Ball in October, and they really get the audience involved.

Audience members for the upcoming Fairlanes concert will be invited to dance. There will be a cornhole game, horseshoes, frisbee and a swing set for children.

“It’s a nice social event where people are out mingling or talking to people,” Ragnone said.

The Burton Rotary Club’s motto is “service above self.”

“We financially support Project Heats On done through Goyette Mechanical and we make snack bags for the workers to take with them for this,” Ragnone said.

Through Project Heats On, workers go out on a Saturday and service over 50 homes for no charge, checking furnaces.

The Burton Rotary Club makes contributions to robotics teams for Bentley and Bendle schools. The club sells paper on a corner for the Old Newsboys and financially supports the Boy Scouts and First Tee of Eastern Michigan, sharing bowl-a-thon fundraiser with the First Tee of Eastern Michigan. People from the rotary club donate their time to help these organizations as well.

Burton Rotary Club members wanted to wait until kids were back in school and summer activities slowed down so more people could attend Music in the Parks.

“Last year we had about 75 people there,” Ragnone said. “This year, we’d like to have double that; 150. When people come socialize, hopefully people can hear a little about the Burton Rotary Club and what we do.”