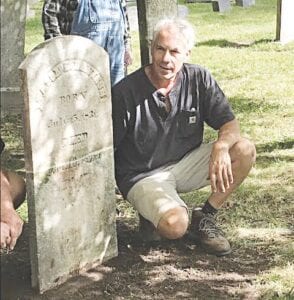 Jonathan Appell goes over some of the finer points of preserving historical headstones. Courtesy photo

GRAND BLANC TWP. — About 30 students from throughout Michigan attended a special class on headstone preservation and repair held Sunday, Aug. 30, at the Perry-McFarlen Cemetery.

Jonathan Appell, a nationally known conservator from Connecticut, headed up the class as part of his “48 States in 48 Days” conservation tour.

Appell has been featured in articles as the conservator of the Knights Tomb, the oldest headstone found in America, in Jamestown, Virginia. He came to Grand Blanc Township at the request of Stephanie Popoff. Appell is visiting each of the contiguous 48 states, giving his free class in an effort to preserve the history found in America’s cemeteries.

From war heroes to grandparents, first settlers to founding fathers, Appell has cleaned, repaired, and restored thousands of headstones over his career.

“I was so thankful for such a great turnout” stated Popoff. “Everyone was so eager to participate and grateful for the opportunity to have him here.”

Although the sign indicates the Perry- McFarlen Cemetery was established in 1864, the graveyard actually dates back another 30 years, Popoff said.

In 1834, William McFarlen and Edmund Perry donated the land for what was originally called the Union Cemetery at Perry and Genesee roads. The donation followed the deaths of Simeon and Sarah Perry’s newborn twins, Joseph and Mary.

The graveyard contains about 786 memorials, including Revolutionary War veteran Nathan Burpee, several Civil War veterans, and many members of the Perry family. The Perrys were among the first families to settle in Grand Blanc Township in 1824-25, Popoff said.

“It is said that the first white child born in Genesee County is Isabel Perry (1829-1889), who is also buried in this cemetery with her family,” she said.

The cemetery also holds the final resting place of Caleb Thompson who was instrumental in bringing the railroad to town in 1864.

“Without the train stop in Grand Blanc Center, we may well be living in Whigville, which was the original planned stop,” Popoff said. “A walk through any cemetery is a walk-through local history, and the Perry- McFarlen (Cemetery) is no exception.”